A Superheroine Musical: A Chat with Sarah Michele, Creator of “Incognita’s Infamous Adventures”

A.J. Pazeski is a washed-up superheroine whose life hasn’t gone as she dreamed. She moves to Big Pond City to be a contestant on “Superhero Idol,” only to be quickly eliminated. She and her sidekick, Connie, take desk jobs at The Place Where Things Are Edited so that they can stay in the city and pursue the superhero life, but it isn’t working. When a new employee, Adam, shows up, A.J. develops a huge instant crush on him. Unfortunately, he’s secretly her nemesis, Baddio. At first, they all clash, but soon they discover something bigger than their rivalry—a threat to BPC that forces them to consider working together.

The musical, festival sensation, Incognita’s Infamous Adventures, is coming to The Fantasy Network this month, starting on Halloween. Sarah Michele joined TFN News to share what inspired the musical and more. 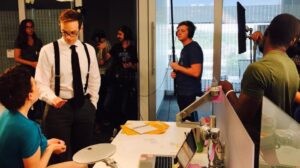 TFN NEWS: Share a little about your background—how you developed your interest in things scifi/fantasy/horror related.

SARAH MICHELE: Fantasy and sci-fi giants completely built my imagination as a kid— C.S. Lewis, Tolkien, Lloyd Alexander, the Star Wars and Star Trek universes, all that, plus Disney. I was always greedy for these stories. The game-changing film that solidified my genre obsession was Jim Henson’s Labyrinth, which I discovered as a preteen. The world-building, the story of overcoming, the scrappy, do-it-the-hard-way style of production, the contact juggling, David Bowie’s music—everything about it totally captured me. Incognita‘s contact juggling superpower owes everything to this movie.

How did you get started specifically in music?

An (unhealthy?) obsession with the musical The Phantom of the Opera. I saw this show as an 11-year-old, and then I started devouring Broadway cast recordings and operas, studying music theory and taking voice lessons, and generally annoying everyone around me. In college while I was getting my degree in opera and musical theatre performance, I started writing and producing music. I did get to be Christine in The Phantom of the Opera, and since then I’ve been able to do a lot of fun theater work, but my passion now is working in the recording studio. I’m a very experienced session singer (Disney, Ubisoft, EA Games, Royal Caribbean), as well as an audio engineer and producer.

What inspired the creation of Incognita’s Infamous Adventures?

I wrote a song called “Gutsy Girl in Tights.” I thought it would be funny to write a song about a girl who is flawed and doesn’t have her life together, but she’s a superhero. After I’d written the song, the character wouldn’t leave me alone. She’d wake me up in the middle of the night and be like, “Hey, what if my nemesis is secretly the guy I have a crush on at the office?” and “What if all my swear words are font names?” 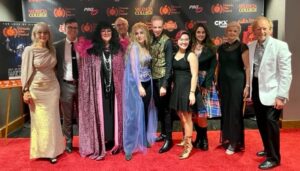 Why write a musical superhero story?

I always write music around stories, and there are about 15 other musicals I’ve got rattling around in my brain based in various genres, but this was the one that got finished first. I think it’s because it’s novel and after I saw Dr. Horrible’s Sing-Along Blog, I wanted more content in that vein and no one else was doing it.

What is it about blending musicals and superheroes that is appealing to you as a creator?

I had never seen that done before Dr. Horrible—the blending of the superhero genre and musicals. It’s such a weird juxtaposition—like the Kingdom Hearts franchise. Disney and Square Enix aren’t two things I would think would go well together, but they do. And I love the enormous scope of the superhero genre paired with the relatively small storytelling you have to access for a musical to work. It’s like, you have this enormous world with titanic forces, but within that world, you have to find a story that’s sort of small, more personal. These are small-fry superheroes. They just want dental insurance.

How did you go about the process of casting for the musical?

We’re really fortunate to be inundated in the professional theater community here in Nashville, so with one exception, all of our cast members are seasoned musical theater performers. Tyler Evick, who plays Buddy, has a resume as long as your arm, as well as his own touring cabaret show and numerous credits doing cast recordings for Musical Theater International, including Quasimodo in “The Hunchback of Notre Dame” and Jean Valjean in Les Miserables. Darci Wantiez is also an incredibly seasoned musical theater performer and session singer. I first saw her as Paulette in the Legally Blonde musical—she was unforgettable. I knew she had to be Connie. Christopher is also an incredible performer—he was actually Emmett Forrest in that same production of Legally Blonde. He’s toured nationally with Celtic Woman and Tenore, and he’s sung on sessions for clients like Ubisoft and Disney. Carla Christina Contreras (Ms. Witz) is our ringer from the film world. She came to the audition and as soon as she walked in, I knew she was exactly what I wanted. I just sat there thinking, “Oh, man, I hope she can sing.” Then she opened her mouth to do her song and I was bowled over.

How did you fund the making of Incognita’s Infamous Adventures?

Mostly, it was people hearing about what we were doing and saying, “I want to be part of this.” For the animation sequence at the beginning, my incredible co-producer, Allie Sultan, got us a grant for a group of animation students at Middle Tennessee State University. We were able to pay 6 students over a summer to get it done.

Then, it was shoestring and mostly self-funded; we had a few people donate to the project early on—that was how we got a few key production people like our Director of Photography and our Location Sound team (at probably 10% their normal rate). The majority of our locations were donated. I built costumes mostly from materials that I already had, built props from 40-year-old hairdryers and things auto body shops were going to throw away, that kind of thing. 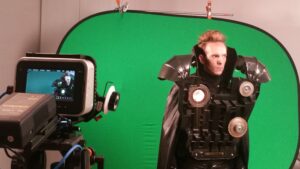 What was the process like of filming Incognita? Were there any unique challenges to getting it right?

Well, I’m not a filmmaker, so I was relying heavily on Allie to guide me through the film side of things. I had built the world, written the script and the music, but I needed her to decode the world for me at the beginning. That was a challenge, and she was really patient with me.

Also, the show is very heavy with special effects. We have more special effects shots in season 1 than The Fellowship of the Ring has. That was an enormous challenge, and our VFX Supervisor, Ryan Rehnborg, was such a gem through the whole process. He was always saying, “Yes, we can figure this out.  We can find a solution.” Our VFX intern, Grace Kwock, was also such a gift. Halfway through post-production, Ryan alerted us to the fact that Apple products cannot be used by villains or antiheroes in any TV or film project. This meant that Grace had to go through every shot where Christopher or Tyler was using an Apple product and cover them up with a 3D model that she designed.

What has it been like taking Incognita on the film festival circuit?

We’ve had a blast going to film festivals. It’s absolutely magical to be sitting in a theater hearing people laugh when they’re supposed to and respond to the music. People are really passionate about the music. Everybody has their favorite song. We had an absolutely rave review from Broadway World at our first festival (where we also won Best Web Series). He hailed us as “the scrappy successor to…Dr. Horrible’s.” One of our viewings had a large group of kids, and in episode 1 when Incognita defeats Baddio (spoiler), one little boy yelled, “YEAH!”

The other really gratifying thing has been the young women who have felt empowered by the show. One reached out to me to tell me that she’s learning to contact juggle and creating her own web series. Another choreographed her taekwondo routine to one of my songs. Another is planning a viewing party when the show releases. It’s just really sweet and a huge part of my mission statement for the show. 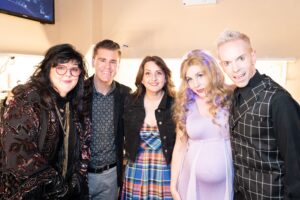 A dream come true! I have been a fan of Journey Quest since I found it in 2013. I loved it so much, and it was so encouraging to me. It was cool to see people getting together and making something really cool happen, and that was so exciting.

What’s coming up next for you?

Season 2! We’ve already got the treatment, and I’m in the midst of writing the scripts and songs. I cannot begin to express how excited I am about the plot. The twists are unreal—it’s going to be so good!

What’s the best way people can connect with and support your work?

Listen to our soundtrack on Spotify.
Support us on Ko-Fi.
Follow us on social media by searching for Incognita’s Infamous Adventures (on Instagram, Facebook, and TikTok)

The other thing people can do that’s really unique to our project is that they can actually bring a live version of our show to their communities. We have been booked in Nashville twice and NYC once, and it’s great fun. We screen the film and then when the songs play, instead of our prerecorded vocals, the five cast members get up and sing the songs live. It’s like Rocky Horror, but with the original cast. People love it!

Previous Talking Masters of the Metaverse with Chris Ode