Talking Masters of the Metaverse with Chris Ode

Editor September 21, 2022 Gaming, Table Top Gaming, The Fantasy Network Comments Off on Talking Masters of the Metaverse with Chris Ode

When a group of strangers is assembled by a secret program to become meta-pilots, you just know there’s going to be trouble, and maybe some heroism too. The pilots are inserted into the avatars of various beings in worlds beyond their imaginations. But all is not what it seems. What is the true purpose of the program? Why were they all brought together in the first place? Who are the mysterious Dark Watchers?

Chris Ode of the Masters of the Metaverse team stopped by TFN News to answer some questions about how this unique and classic live role-play show came about.

How did you get into tabletop gaming?

CHRIS ODE: I’ve been interested in video games as far back as I can recall, but didn’t get super into TTRPGs until meeting the guys from Dead Gentlemen Productions after college. (We went to the same university, but didn’t hang out while there.) They had a regular group going (which continues to this day!), and it was clear the best way to get to know them all was to join.

What sparked the idea for Masters of the Metaverse?

Christian Doyle and I had been looking for ways to create a livestreamed version of Gamers Live, but nothing was working. We’d stumbled into working with Hyper RPG (a Twitch streaming channel) after Gen Con 2016, and had been approached by them to develop our own show. As we talked about possible concepts, we kept coming back to the Gamers Live mechanic where the performers switch back-and-forth between their PC and “real world” characters at the gaming table (and the chaos and comedy that comes from doing so!).

That nugget sparked memories of watching Quantum Leap as kids and other science fiction franchises where a “pilot” leaps into an “avatar” via some means or another. From that germ of an idea, it all started coming together really quickly. 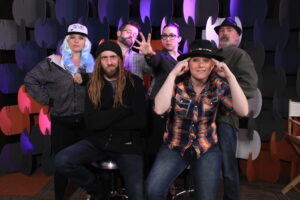 What made making it a unique experience?

Getting to create so much content with some of my favorite people and having fans love and support it —emotionally as well as financially!

What do audiences love about Masters of the Metaverse? And what can new listeners expect when they tune in?

I think audiences really enjoyed the controlled chaos of the show — our willingness to field anything they threw at us and incorporate it into the show in real time. We prided ourselves on creating and running one of the most interactive livestreams possible. They also connected strongly to the characters and their performers: the fan fiction and art we received was incredible!

How did you find the actors, writers and production team?

Several of them had worked together on Death from Above: Renegades (the Hyper RPG TTRPG we started in 2016) — Sarah Sanders-Ode, Christian Doyle, Maggie Doyle, Kelly Fuson, and me. Vannesa Postil was in an improv troupe with Christian, Maggie, and me a few years earlier. James Dean (portrayed #Hashtag) was intended to be a series regular, but his work schedule reared up and prevented him from being as active as intended — not getting to see him on camera regularly was my one casting disappointment.

The various guest stars we brought in were drawn from the Seattle area film and theatre community. Christian and I handled the writing and production duties: we’ve been working together in one form or another since the early 2000s back in Dead Gentlemen Improv. 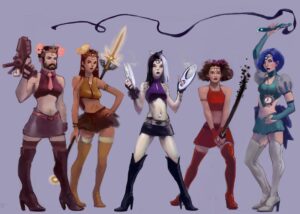 What are some things you’ve learned while making the show?

Not to overthink or overplan things: the audience and the cast would throw enough curveballs along the way that it was often best to come in with only a few story points and let the rest evolve naturally.

What advice would you give to creators interested in making their own podcast, or any other form of creative storytelling?

It really depends on the medium and what their goals are, but the simplest piece of advice would be to simply start: not to worry about perfection or polish out of the gate, but just to try.

What’s it like to see Masters of the Metaverse come around again through TFN?

Metaverse is one of my favorite projects to have been involved with – it’s always gratifying to see new people discover it!

How can audience members stay connected with you and your team?

Numerous folk from the show continue to work and play together on various ZOE livestreams. You can also catch several of us every year at Gen Con via Gamers Live and livestreamed TTRPGs.

Metaverse(and DfA Renegades before that) were not only incredible experiences in general, but I will always take delight in knowing that they provided a means for the ZOE fanbase (and others) to discover just how awesome and talented Sarah (my wife) is!

Previous Making a Fiction Audio Drama: A Chat with the Cast of Broken Road
Next A Superheroine Musical: A Chat with Sarah Michele, Creator of “Incognita’s Infamous Adventures”