Making a Fiction Audio Drama: A Chat with the Cast of Broken Road

Fans of BROKEN ROAD, the dystopian audio drama, have enjoyed getting to know the cast of characters behind the story. The show wouldn’t be as successful as it is—climbing the Chartable charts, and making best sci-fi podcast lists from both The Guardian and Fiction Horzon—without great actors.

We chatted with three of them—Lana McKissack, who plays the heroine Rebecca; Taylor Murphy, who voices the conflicted Ali; and Ian Paget, who voices the comedic, villainous Roy. They shared their insights into what goes into creating a strong, compelling fiction podcast.

TFN: How did you become involved with BROKEN ROAD?

LANA: E.J. Kavounas (producer and writer of BROKEN ROAD with Jacob Pinion) asked me to do a table read of the script. I didn’t even know I was being considered for a role. A few months later, they reached out to ask if I would play Rebecca Clark (the story’s heroine).

IAN: As a sci-fi audio drama, Broken Road is a completely different medium and genre than I’ve done, but it was one of those moments where I luckily knew Jacob Pinion (executive producer and writer of Broken Road, along with E.J. Kavounas).

TAYLOR: That was through my amazing agent, Portia Scott with Coast to Coast. I initially auditioned for a different character, so the role I ended up booking (Ali), I didn’t even know existed.

What intrigued you about playing your character in the audio drama?

LANA: Rebecca is a badass! She’s brave and she’s strong, and it’s always fun to play a character like that. An as actor, you think, “In a situation like this in the real world, how would I act?” It’s fun to inhabit someone else’s brain for a little bit and say, “You know what? I’m going to be a badass!”

IAN: Well, I love anything sci-fi. And I loved being able to bring to life a character who is the comedic relief. Roy is like the LeFou character (the comedic sidekick of Gaston) in Beauty & the Beast. Broken Road was fun, because comedic roles like Roy are some of the hardest to do—so if you’re lucky enough to be doing one and having fun, it is really rewarding.

TAYLOR: I love playing badass, empowering women who take charge. I love her tenacity. I love that she’s a little edgy. At the root of everything, she’s searching for belonging and community—and that’s something I can connect with. And it’s happening in this totalitarian world where it’s the people against the government, and she has one foot in both. Where is she going to end up? I love being able to see the conflict of that, in following your heart and your head.

What’s it like performing in an audio drama? What was challenging, rewarding about it?

LANA: We did a table read together, but then it was all done on our own, individually recorded, and we sent our recordings in for post-production. We weren’t even patched in to get real-time feedback. So, it was very much, I get to create this world, this character, exactly as I see her and wing it and just hope for the best. Getting to use my imagination—that was the fun of it but also the scary part. You don’t have someone immediately telling you you’re going in the right direction. But I recorded the episodes over time, so if I was way off track, they would have told me pretty quickly. 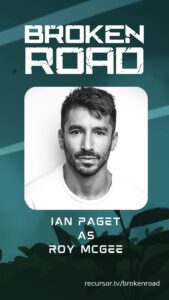 IAN: It felt very new to me because I don’t do voice acting all the time. But it was really, really fun for me. I felt comfortable, and there was just this collaborative effort with the producers and the sound engineer. There’s just something about giving three different takes, and none of them are wrong, it’s all just exploration—and in the moment, you can hear it back. It was a collaborative effort, but overall the role of Roy was just fun to play around with.

TAYLOR:  When you take all of the visuals of film away and you just have the voice, it’s a whole different type of acting style. But I broke down these scenes the exact way I would for a film. I also really like to visualize things. How do I envision this character? I imagine Ali looking like Charlize Theron in Mad Max. Ali definitely has that really cool haircut, and she’s super strong, and she has a commanding presence. So I always made my voice for her come from the diaphragm, very powerful. I always wanted to come from the ground, very stable.

What’s it like to see BROKEN ROAD come together?

LANA: To see it all come together has been really cool. My mind is blown as to what’s possible and what they’re capable of, just technologically, that you can send people off with just words on a page and assemble it all and turn it into a story. It’s amazing how it worked out. It’s a complicated process, but I think they absolutely smashed it. It sounds so cool.

What’s coming up next for you?

LANA: I’m working on a Harry Potter mobile game called Harry Potter: Magical Weekend which has been out in Asia and is supposed to come out worldwide this year. I play Moaning Myrtle. She’s so entertaining and has such a dynamic range from the cute, coy girl to pissed off. I really enjoy that. I’m also working on an animated series and a video game, both very hush-hush. 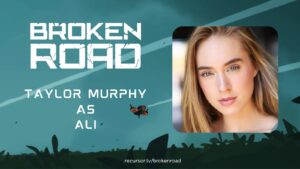 TAYLOR: When I’m not in front of the camera, I coach actors and take people for their auditions. I work with kids, teens and adults, and I love when the adults come in. It’s something really cool when you see an adult who has to pretend that they’re part ape or something. You really have to put yourself out there and be silly and paint that picture.

IAN: We’ve got three episodes up for my new podcast and passion project of It’s Giving Share!, and the fourth one drops soon. It is essentially about sharing our stories and experiences in hopes of creating meaningful connections and conversation around the day-to-day of our lives. Episode three, for example, was about time—and we discussed how people think about it, whether we have too much time, being aware of mortality, whatever. We just cover all these things, and hopefully people laugh along the way, and they feel seen and heard.

Catch BROKEN ROAD wherever podcasts can be found.

Previous ElfQuest: The Audio Movie Is Live
Next Talking Masters of the Metaverse with Chris Ode