It’s always a good feeling when the indie creators featured on The Fantasy Network have success. So, we’re thrilled to be able to share the latest good news…

Ignore Cty tells the tale of a post-apocalyptic future, in which technology has been outlawed and the remaining humans live under a dome to escape the devastated world climate. Deban Rimpa, a scrappy bike messenger, discovers and befriends the head of the sentient robot, Saner 0805. Deban embarks on a grand adventure through Ignore City to save civilization with Saner’s help. That is, unless thugs, bike gangs, black market overlords, government agents, and a precocious 10 year-old girl destroy Saner first!

If you haven’t caught it yet, Ignore City can be listened to via TFN Audio Channel. Read our interview with Ed Cho here. 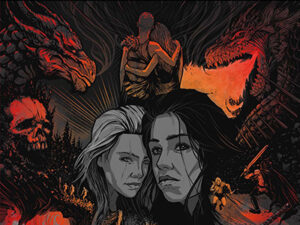 Dawn of Dragons tells the tale of an unlikely band of heroes. When their hometown of OallEnAkhan is destroyed, Young Cordelia, the Fire Mage, aspiring knight Benedict, bright-eyed mariner Zorin and the deadly swordmaster Sophie fall under the tutelage of Elloveve Hawklight, a secretive yet legendary elven scout archer.  Destroyed by the local Justice, Lord Pallus (Zorin’s father), his Dark Army grows increasingly more powerful with the addition of a cruel dark cleric serving an evil queen of death along with her legions of dragons.

The Die as Cast’s Griffin Cork Gets a Nod

Interested in checking out the New Jersey Web Fest? Winners will be announced at the fest’s Gala on September 25, 2022! See the full list of nominations here.