House of the Dragon Is Here—and Fans Are Loving It

Editor August 22, 2022 Fandoms, Fantasy, Fantasy Television, featured, Featured Articles, Game of Thrones Comments Off on House of the Dragon Is Here—and Fans Are Loving It

Game of Thrones fans, it’s time to get excited! Not only is House of the Dragon here and ready for viewing, it’s looking fantastic and audiences are loving it.

What the new series is promising to viewers is all the best of the original Game of Thrones series back to delight us—the political drama, the action, the intrigue, and of course, dragons. I mean, who doesn’t want to see that, right?

If you’re needing a catch-up on who’s who in the series, there’s already a ton of reporting and summaries out there. (Here’s a place to start.) 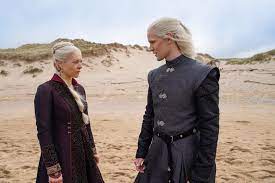 There’s a ton of spoiler alert stuff too that you can browse through, if you need to read what happens in the premiere before you see it. Lists of Easter eggs are already showing up online.

Just be forewarned, because fans are talking about episode 1 already, and in detail. We won’t do that here. We’ll just say, watch it, and then come back and share your opinions.

Episodes of House of the Dragon air on Sundays at 9pm Eastern on HBO. The first season will run for 10 episodes, premiering weekly throughout September and October.