If a medieval style, classic high fantasy rich in back story and a lived-in, believable world for the characters to inhabit is your kind of read, then you won’t be disappointed by The Stoneholding, the first book in The Legacy of the Stone Harp series by James G. Anderson and Mark Sebanc.

Sebanc, who is also known for his work on the Rockall series, is an inventive writer who clearly connects with the art of creating a rich fantasy world that readers can relate to. Anderson is a teacher, musician, and poet with a clear creative bent. Together, the two weave a story that will draw high fantasy readers in and won’t let go. 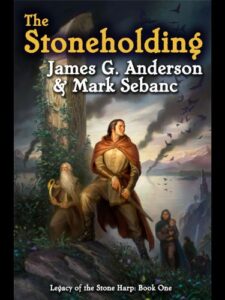 In The Stoneholding, we meet Kalaquinn (Kal for short), whose normal everyday existence gets interrupted by two big changes to his world:

One, he discovers that his father was connected to the attempted rescue of the queen and her baby (heir to the throne) during a coup to take over the kingdom. In usual throwback fantasy form, Kal has a calling he didn’t know he had. (And of course, an ancient magical sword to find, to boot.)

And two, the Sacred Flame has been extinguished. And so there’s a quest that needs to be undertaken. The land, as often happens in Tolkien-like stories, is out of balance. Things need to be put right.

And so, for fans of this immersive, character and setting driven storytelling, The Stoneholding is a perfect fit. Every single character who appears on the pages feels believable, real, and you can practically see and hear them like they’re in the room with you. That’s one of this book’s strengths — well-crafted characters that you end up rooting for, or against. The places where the story takes place feel real too, grounded in details that make the world feel like it exists and is just a boat ride away.

Of course, to have that kind of in-depth immersion with people in their setting, you also have to take the leisurely time to describe how this fantasy world works. And this story in particular has plenty of back story to share, as well as a lot of nuances to the different cultures and places that it covers. There’s only one way to provide this information to readers — that is, at a pace that takes its time.

The prologue, for example, is lengthy, and definitely not what you see often on shelves these days. Yet the intriguing, slow-build tension and reveals, followed by dramatic, climactic action and tragic consequences, pull you in and keep you turning pages. And because the events in that prologue directly affect Kal, the heart of the story, it’s hard to imagine starting the tale any other way.

Admittedly, some readers won’t like this methodical unfolding of the setting, characters and plot, even though it pays off in an unforgettable story experience. Still, Sebanc and Anderson are not afraid to take their time to let you get to know the characters and the world they live in. If you want a constant thrill-ride of action with less deep characters, there are other books that might suit you better. But those who enjoy Lord of the Rings, Game of Thrones, and similar stories will find exactly what they’re looking for in The Stoneholding.

In any event, a truly immersive book with a fantastical setting that you feel you could easily step into at a moment’s notice is a treat all its own, and can be hard to find. Tolkien fans will enjoy this book.