The Perilous Quest of the Princes of Sandastre begins…

It is the year 1403 in the high Middle Ages. King Henry reigns in England, While England smolders with suppressed rebellion, young Simon Branthwaite sets sail across the Atlantic in search of the lost realm of Lyonesse. His quest will take him to Rockall, a land wreathed in legend; a land of weird beasts and wondrous happenings, of great beauties and terrible dangers, a lost world, all that remains of the legendary continent of Atlantis. 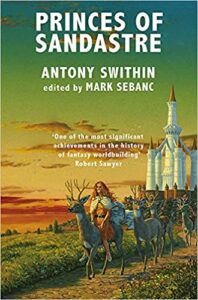 And there begin Princes of Sandastre — with adventures stranger than the wildest of Simon’s imaginings; adventures that will change the course of his life and reshape that land forever…

That’s the concept behind Princes of Sandastre, the first in a planned 12-book series based on the work of Antony Swithin that is being revised, edited and completed by author/editor Mark Sebanc. Sebanc took up the work on the Rockall series after the estate of Swithin (who wrote under the pen name William A.S. Sarjeant) invited him to complete the project after Swithin died in the early 2000s. The series arc promises to be quite a ride, with unforgettable characters in a rich landscape where readers who love world-building will find a lot to enjoy.

Princes of Sandastre is both a revision and enrichment of Swithin’s original stories, the first four of which were publishing in the 1990s. The series was interrupted by his untimely death, but he left a rich set of notes and maps behind for someone to develop. Enter Sebanc, a Canadian novelist and scholar, who brings in his own edits and additions to help the story appeal to 21st century readers.

Sebanc first encountered Swithin’s story while browsing in a bookstore one day in the mid-1990s. Like many readers, he became quickly enamored by the classic feel of the story, which hearkens back to works like Lord of the Rings, The Mists of Avalon, The Lost World, The Crystal Cave, and other books based in the British mythology landscape.

The world of Rockall is a throwback high fantasy of the best kind, one that reminds you of Tolkien and Conan Doyle, and written well enough to draw you in and keep you reading. The story is richly crafted, with a thoughtful, intricate setting and strong narrative storytelling.

To draw modern readers into the tale, Sebanc adds his own take to the story’s framing. Much like other portal novels, Rockall exists in an alternate dimension and can be entered from today’s world through a wormhole. Those who love The Chronicles of Narnia will appreciate that touch.

The story begins as the narrator, Christopher, recalls a story his grandfather, Antony, had told him of landing on a mysterious, magical island called Rockall during World War II. Could this land be Lyonesse, a land shrouded in the mists of time, one that sank into the sea like Atlantis? The fantastical place, tied as it is to King Arthur and Tristan and Isolde, seems like a fever dream. But of course, in the way all fantasy stories like this begin, readers will soon find out it’s no dream at all. The world of Rockall exists, and we’ll be plunged into its dramatic adventures soon enough.

The story becomes a sort of mystery, with Christopher on the hunt to find out if his grandfather’s tale of this mythical land could have, in fact, been true. This takes him to scholars and secret societies, reading old journals and perusing handmade maps, the kind of adventure that readers of this type of book enjoy and envision undertaking themselves, should they ever be so lucky to stumble across such a mystery.

Soon, readers find themselves plunged into Antony’s own tale, a navy man in the second World War, and then Antony’s own fascination with the story of Simon, a man in 1403 AD England, who has a destiny of his own. And while the tale’s setup may sound complex, it’s easy to get caught up in the masterful storytelling.

Still, what appeals most about its tale is the timeless connections it makes to legends like Atlantis, Avalon, King Arthur, King Henry and more… the sort of legendary visions that many high fantasy readers are attracted to. Princes of Sandastre makes a great addition to your bookshelves alongside any of your Tolkien and Arthurian tales.

Books 1 and 2 in the series, Princes of Sandastre and Lords of the Stoney Mountains, are already available where books are sold, and they feature beautiful cover art illustrated by Ted Nasmith, well-known for his Tolkien illustrations.

If you’re interested in learning more about the author and taking a deep dive into the Lyonesse series, you can also check out the YouTube interview between Sebanc, Nasmith and John DiBartolo. Or visit the series website: The Perilous Quest.

Michele has been writing and editing professionally since 1997. In 2017, she launched full-time into her own copywriting and editing business, serving marketing firms, service businesses, nonprofits, book publishers and consulting firms, as well as indie authors. She serves as Editor of the science fiction website Recursor.tv and The Fantasy Network News. Michele is also co-founder of Writing Well Creative Writing Workshop and co-founder of Two Birds Author Services.
@chippermuse
Previous The Die as Cast: An Entertaining D&D Role-Playing Podcast
Next Broken Road Episode 3 Is Here: Listen in Today