Ready for a new dystopian audio drama featuring stellar actors Manu Bennett, Indiana Massara, Lana McKissack, and Peter Shinkoda? Get ready for BROKEN ROAD, a story you will not forget! 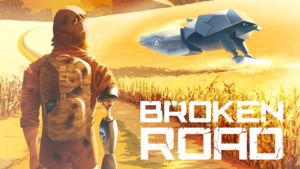 In the near and uncertain future of BROKEN ROAD, veteran Sergeant Emmett Lee (SHINKODA) wanders the countryside in search of replacements for his obsolete military-issue implants until he finds himself at the mercy of Rebecca Clark (McKISSACK, a single mom struggling to keep her farm afloat with the help of her rebellious daughter Carly (MASSARA). All but the most stubborn townspeople have been driven out of business by agritech behemoth Chem-O-Grow and its ruthless enforcer Arlin Frey (BENNETT). The reticent hero teams up with the Clarks to undertake a dangerous scheme to free the town from Chem-O-Grow and the cruel Frey once and for all.

The story of BROKEN ROAD is shared in a ten-part limited series that hits podcast outlets weekly starting July 25, 2022. You’ll want to check out the Broken Road trailer to get a taste of what’s coming.

BROKEN ROAD is a story of ingenuity in the face of corporate greed, exploring what it means to be human, the need for personal connection, and the strength of community in the face of insurmountable forces. Based on the short story “Patience Lake” by Matthew Claxton, the dystopian science-fiction audio drama was created by FEAR THE WALKING DEAD writer Jacob Pinion and HERO MODE producer E.J. Kavounas, who were inspired by the story’s characters and themes.

“What attracted me to the source material was how much it reflected the world we live in today. In the tradition of High Noon and Shane, BROKEN ROAD shows we can succeed if we help each other even in a community gripped by distrust,” said Kavounas.

Meanwhile, Pinion “was drawn to the stark juxtaposition of near-future sci-fi within a grounded, human story about survival and the refusal to let go of the American dream.”

Director Ron Newcomb (of the Forge Studios and known for projects like OUTLAWED FAITH) mentioned the story’s personal significance: “As a veteran, I was drawn to this story which gives voice to the men and women who served our nation.”

Learn more at the Broken Road website and don’t forget to subscribe through your favorite podcast provider starting July 25!

Michele has been writing and editing professionally since 1997. In 2017, she launched full-time into her own copywriting and editing business, serving marketing firms, service businesses, nonprofits, book publishers and consulting firms, as well as indie authors. She serves as Editor of the science fiction website Recursor.tv and The Fantasy Network News. Michele is also co-founder of Writing Well Creative Writing Workshop and co-founder of Two Birds Author Services.
@chippermuse
Previous Telling Monster Tales: Welcome to the Mihmiverse — Now on TFN
Next GenCon Is Approaching: Take The Survey for Zombie Orpheus Entertainment