Ready for a post-apocalyptic, musical audio drama with touches of Futurama and Terminator? Then you’ll love IGNORE CITY, a whimsical sci-fi audio drama rock musical written by Ed Cho, with original songs by THE SHAKE UPS. IGNORE CITY debuts April 19 on the new Audio Channel at The Fantasy Network.

The tale of IGNORE CITY is as entertaining as it is driven by post-apocalyptic tropes. In a future where technology is outlawed, Deban Rimpa, a scrappy bike messenger, befriends a sentient robot head named Saner 0805. She embarks on a grand adventure through Ignore City to save civilization before government agents catch up with her. Series writer Ed Cho is an all-around indie creator. In addition to IGNORE CITY, he’s the writer and co-creator of Little Guardians, a fantasy adventure graphic novel series about kids fight monsters…badly. He animates shorts for the Monkey and Llamacorn web series about stuffed animals in an office setting; his kids do the character voices.

Cho also plays guitar for two bands — The Resounding Maybes, a shoe gaze/dream pop band, and The Shake Ups, a pop/rock band that specializes in fandom -based music. The Shake Ups provide all the music for the Ignore City podcast show. And that link to music drew him to creating audio science fiction.

“The Shake Ups write a lot of original songs about existing cartoons like Voltron, My Little Pony, Steven Universe, Scooby Doo, and many more,” says Cho. “I wanted an original story that could incorporate our song writing. While I don’t have the ability to create a full-fledged cartoon on my own, I did have the means to create an audio only podcast. The members in the band provide most of the voice work, though I did rope in a few friends to help us out. It made sense to turn the whole thing into a rock musical to feature us as a band.”

Telling a story through sound

As a writer of comics and a songwriter as well as audio drama scriptwriter, Cho appreciates how different forms of writing and creation can lead to unique storytelling. 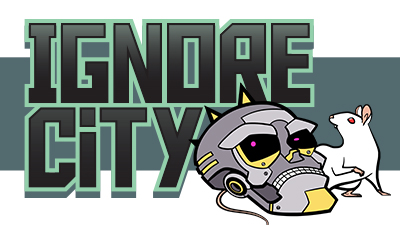 “It’s very different writing for something that is purely audio based,” he says. “In comic books, I try not to be too verbose. That way, in Little Guardians people can see Lee Cherolis’s incredible art.” (Lee is also a member of The Shake Ups.)

For audio fiction, Cho says the experience is the complete opposite. “There are no visuals, so I have to tell a story just through dialogue and narration. I can be as wordy and long winded as I want to be. In fact, there’s a character in Ignore City where the running joke is he rambles on and on too much. Steve voices this character, and it makes me laugh every time he does it.”

Putting the team together

Creating Ignore City is a close-knot affair for Cho, drawing on family and band mates for the behind-the-scenes work of creating an audio drama (which can be an intense amount of work!).

“Most of the voices in Ignore City are provided by the band member,” says Cho. “My wife and daughter do a voice. A good friend of mine, Damian Duffy, does a voice. Patrick O’Connor, our lead singer and songwriter (for the Shake Ups), handled all the recording and mixing for the main songs. I handled all the audio production and voice editing myself.”

That process of creation, those demanding, has been rewarding as well. Cho has especially enjoyed working with the voice actors and hearing them breathe life into their characters.

“I can’t imagine Deban Rimpa being played by anyone else other than Savannah,” he says. “It’s great when they deliver lines differently than how you had it in your head. For instance, Luisanna created a voice for a one-off character I needed for a scene. I didn’t really plan for this character to be recurring, but she had me cracking up so much, I wrote this character back into the show.”

Tuning in to the entertainment

Ignore City is debuting April 19 on TFN, alongside a host of fun, inventive, binge-worthy audio dramas for fantasy and sci-fi fans. Check out all that TFN has to offer — mostly free, but supported by fan subscriptions. Don’t miss the latest and best. Tune in to TFN to see what’s new.

Michele has been writing and editing professionally since 1997. In 2017, she launched full-time into her own copywriting and editing business, serving marketing firms, service businesses, nonprofits, book publishers and consulting firms, as well as indie authors. She serves as Editor of the science fiction website Recursor.tv and The Fantasy Network News. Michele is also co-founder of Writing Well Creative Writing Workshop and co-founder of Two Birds Author Services.
@chippermuse
Previous Ancient Forces Awakening: The Grove on TFN’s Audio Channel
Next Award-Winning Fantasy Animation Lucidity Airing on TFN