Sci-Fi and Old Viking Gods: The Engaging Mashup of INGVAS

Share
In the near-future Earth of 2090, solar storms have racked the land, destroying power supplies, bringing about the death of technology… The land is scorched, bleak — a dusty shell hiding water only in the deepest depths. Those still surviving try to farm these harsh Barren Lands, but seasons pass without yield. 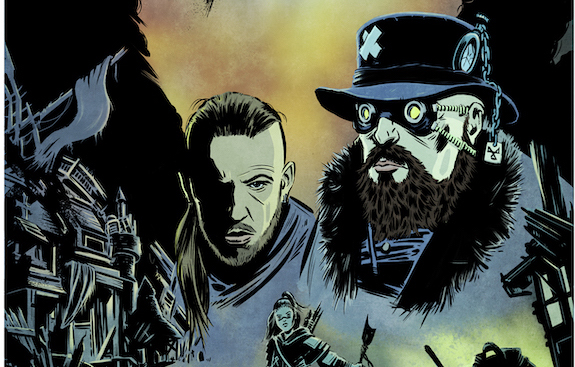 There are some, however, who still live comfortably: the gluttonous overseers have control over military force, able to hunt mutant creatures for their meat and keep the workers in line. They offer protection from the harsh wilds, but their bargain is soured as the workers watch them feast each night.
Abandoned of hope, the workers look to the old gods for guidance… to Ingvas.
INVGAS tracks the incitement of an uprising in the workers of a post-apocalyptic society. It’s the story of choosing your own fate. The characters are inspired by tales of Viking mythology, and reinterpret those practices to their cause, but the path of freedom is never that simple.
The creative team at Pale Raven Pictures, the crew making INGVAS, say that the world and Viking-inspired context came from the apocalyptic extreme metal band Terminal Sun. “They wrote the song Oblation to Ingvaz through the lockdown of 2020 and even recorded and mixed parts remotely,” say the Pale Raven team. “We approached the band about collaborating to expand on the story in the song, produced a pitch about a workers revolt (which the band loved) and took it from there!”

As filmmakers, Pale Raven Pictures isn’t making a music video. Instead, they are experimenting with a more abstract way to tell the story’s narrative.

“The film has no dialogue, so all the emotion and story is conveyed visually and musically, to a rhythm or beat,” says Pale Raven’s Cieran. “Myself and Dale (as writers at Pale Raven Pictures) often focus on dialogue to tell stories, so we wanted to push ourselves out of that comfort zone and make something new. It also makes the film internationally understood. There’s something of the lockdown times in that: not always being able to say what you feel as you’re still processing it, yet somehow feeling understood by everyone across the world. Of course, having no dialogue does free up plenty of space for action sequences as well, so we’re very excited about that!”

Michele has been writing and editing professionally since 1997. In 2017, she launched full-time into her own copywriting and editing business, serving marketing firms, service businesses, nonprofits, book publishers and consulting firms, as well as indie authors. She serves as Editor of the science fiction website Recursor.tv and The Fantasy Network News. Michele is also co-founder of Writing Well Creative Writing Workshop and co-founder of Two Birds Author Services.
@chippermuse
Previous Wild, Weird, Creepy: 19 Nocturne Boulevard on TFN Audio
Next Ancient Forces Awakening: The Grove on TFN’s Audio Channel