Welcome to a review of historical events so fantastic, you’d think we made them up! One of TFN’s new Audio Channel highlights, the audio drama VORPAL HISTORY is a fantastical look at events of the world starting with the founding of the Dun Welmish colony in an America where monsters, magic, and unwanted adventurers somehow manage to create a nation much like our own, but with even more mistakes made by everyone involved. 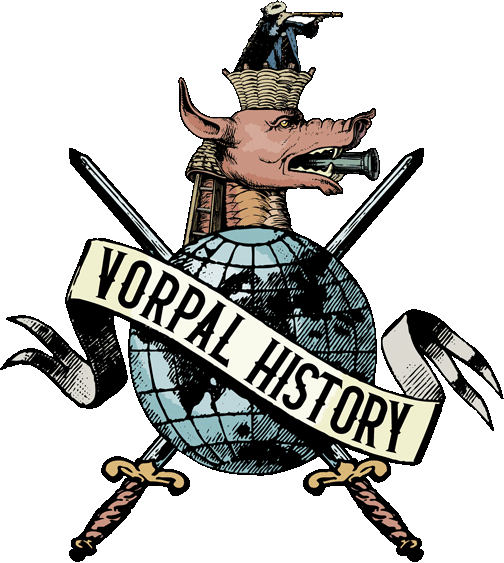 “I’m working to give them a show that sounds like a factual-ish review of something familiar but slightly askew,” says Williams. “It’s reports from a place where Mt. Rushmore probably exists, but at least one portrait has a helmet and another has pointed ears. It’s where a Civil War was fought between the West and the Farther West over necromancy. Oh, and talking animals have caused all kinds of shenanigans everywhere.”

Drawn to character-making, laughs and creative takes on history

Williams has drawn comics and cartoons for as long as he can remember. Attending various genre conventions led to a chance to meet the Dead Gentlemen, creators of the GAMERS, one of The Fantasy Network’s premier indie film series. His fantasy Henchman character, Nodwick, has since become a part of the Gamers-verse. With Vorpal History, Williams has branched out into podcasting, a relatively new endeavor for him.

“But since most of the work (of podcasting) is writing and trying to be funny, I’m hoping I’ve got that end of things covered,” he says.

The idea for the show stems from Williams’ appreciation for documentaries and factual tales, which dominate podcasting and YouTube these days. “I found myself gravitating towards the ones that looked at the weirder side of things,” he notes, “like eccentrics who went over Niagara Falls or the records of a particularly unlucky naval vessel that almost sank an allied ship with the current US President on board. I then wondered if it’d be easier to make a funny history podcast if I used made-up history. I’m still not too sure if it is.”

Fans the alternate history genre will enjoy Vorpal History. “What I’ve wound up with is a world where history will have the same rough shape as the real thing, but the structure of how things happened is wildly different and involves people who can cast spells. And people who are elves. And dwarves. And other things yet to be determined,” he says.

We dove into some more questions with Williams, who talks about the making of his show below.

What drew you to audio as a medium for storytelling?

WILLIAMS: I grew up with my parents’ record collection, and a lot of that was recordings of comedians, radio shows, and “novelty” stuff like Stan Freberg, Alan Sherman, Tom Lehrer, and things that have probably been heard on the Doctor Demento show. It was also the era where NPR started playing stuff like the Hitchhiker’s Guide to the Galaxy, and I discovered you could buy Monty Python cassettes, so I was probably wiring myself for that kind of presentation.

The NPR show This American Life also probably played a really big part. The way they told stories that were hysterical, touching, and always interesting likely shaped podcasting more than Ira Glass wants to think about.

It’s probably also why I love dialog where it starts off going one direction and has a left turn at the end that makes it unexpectedly funny. It’s how the aforementioned Hitchhiker’s Guide can tell you the population of the universe is zero and then pulls out the idea of dividing by zero to prove it.

What do you love about audio?

For discussion and hearing people review or hold forth on aspects of the SFF genre, podcasts are hard to beat, especially if the hosts are really into their topics. It’s like inviting some friends over to talk about what you’d love to be talking about, in some cases.

As for the storytelling side of things, I think it’s helped that we’re all familiar with audio productions from old-timey shows like The Shadow or The Lone Ranger, as well as consuming audiobooks. We’re used to having dialog be read by actors with sound effects and music, and it’s also not dissonant to then have a narrator reading the non-talky parts so we don’t need the protagonists describing everything they see and do to get the point across.

Sound quality is a big hurdle, I’ve found. Most podcasts that are still ongoing after a dozen episodes have figured out how to make their vocals sound clear for the most part.

This was probably the hardest thing to create myself, as my microphone isn’t the greatest and my office has loads of fans and occasionally my son is in it playing computer games. So I mostly record in a closet where I’ve put padding up, and it’s worked out pretty well.

Sounding like someone who does movie voice-overs helps, but since most of us aren’t that, constantly reminding myself to slow down and try to speak with just a little more clarity helps a ton.

It’s sort of like creating an outfit or costume. Tailoring it to fit the way those involved can present it best is probably most important, which is also why sometimes podcasts need time to evolve. I figure my own will undergo changes over time, which I think will reflect a refinement of the concept.

How do you make the story come to life for listeners?

Sound effects are something I’ve always loved, ever since I saw David Letterman throw a pencil through the “glass windows” behind his desk. Most of what I do is comedic, and it’s often from made-up written sources that someone put down with pen and ink. I love having when a character writes something that they realize is going to get them in trouble, pauses, and then I play a pen scratch as they correct their error in judgment. It’s little things like that I think creates a flavor to stories.

Explosions can be fun, too. I haven’t found a good place for them yet, but I’m sure at some point they’ll make an appearance.

And since this is an audio production, the way the dialog is read from my “sources” can convey things like sarcasm or veiled criticism of his boss, that kind of thing. It’s also reaction-style humor. I’m getting to have the character go through something that visually would’ve required a lot of special effects, but they get to describe it in a way that makes it fun to hear about even if you didn’t see it.

What has been the most rewarding part of making this show?

Finding out I could do it. It’s a lot of writing, somewhere around 4,500 words a show, which seems insane just looking at the scripts so far. When it’s all edited and mixed, it seems so relatively small compared to the script, the multitrack session, etc. It’s a great feeling when it’s complete.

I can also mix audio now! I promise to not try and make remixes of 80’s pop hits and the theme from Airwolf.

What advice would you give to creators interested in making their own podcast?

Find a format for your presentation you’re comfortable with and can live with doing over and over. Don’t be afraid to re-record things that don’t sound great, and if there’s an effect you want, there’s probably a tutorial for it. I just used one to learn how to make a nifty “ghost voice” effect for an undead character. It almost hides the really terrible French accent I was doing at the time.

Also, there’s a site called freesound.org. Just look for sounds with the “Creative Commons 0” license for totally free sound effects, music stings, just about anything you could think of.

What’s the best way for listeners to support you and the making of Vorpal History?

I have a Patreon that some very generous supporters have been contributing to that I wouldn’t be here without. I hope this broadens the appeal and gets more people to support not just me but all the other contributors on TFN.

I also sell digital downloads of graphic novels over at DriveThruComics, and I have a book of short stories up on Amazon.

What excites you about being part of TFN?

Having a shared space with so many other creators for people to discover! I don’t have a huge footprint in the world of podcasting, and I don’t know if I’d get a lot of people discovering Vorpal History without TFN to help them find it. Also, the people running TFN are awesome, and they let me (be there).

I’m very grateful to all of the people who helped keep people like me going, especially during the recent pandemic. I’m sure I’m not alone in only being able to keep putting out things like this because of the support we’re getting from fans. You’re all wonderful and making sure creative works are being put out for the world to enjoy. Thank you!

And another apology for the accents. I’m doing my best to become Mel Blanc, but it takes a lot of practice.

Michele has been writing and editing professionally since 1997. In 2017, she launched full-time into her own copywriting and editing business, serving marketing firms, service businesses, nonprofits, book publishers and consulting firms, as well as indie authors. She serves as Editor of the science fiction website Recursor.tv and The Fantasy Network News. Michele is also co-founder of Writing Well Creative Writing Workshop and co-founder of Two Birds Author Services.
@chippermuse
Previous The Resonance: A Sci-Fi Audio Drama Now on TFN Audio
Next Wild, Weird, Creepy: 19 Nocturne Boulevard on TFN Audio