Ready for some fantasy comedy great for audiences of all ages? Then it’s time to tune in to Magus Elgar — a rollicking tale of magic and adventure debuting now on TFN Audio — the audio fiction and podcast channel for The Fantasy Network. Inspired by the works of Terry Pratchett, Magus Elgar is a wild ride that you won’t want to miss. 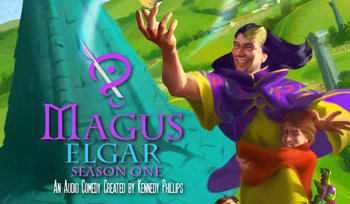 The story follows spell caster Magus Thaddelor Elgar as he works to master dangerous, exciting magic. A talented Caster, he faces plenty of challenges of the sort you’d expect from a humorous fantasy tale. Whether it’s animated chicken nuggets, crazy wizards, giant goo monsters, or other bizarre and dangerous magical artifacts to face down, Magus and his cohorts find plenty of adventure as they try to control the magic before reality is ripped apart at the seams.

Magus Elgar creator Kennedy Phillips discovered his love for audio fiction early on. “I once listened to an audio showcase as a little kid where I was put in a big cardboard box with glow-in-the-dark stars,” he says. “I got to use my imagination as audio played of me rocketing to the moon. It always stuck with me.” In college, he found further inspiration from a BBC parody of Dr. Who called Professor Nebulous. Eventually, he began Magus Elgar as a way to pursue become a creator of the entertainment he enjoyed so much.

Below, he shares some insights into the series he is making, and why he chose audio for his genre.

TFN NEWS: What sparked the idea for Magus Elgar?

PHILLIPS: Magus Elgar originally started as an anthology series called the ‘fractus’—which was about Magus Elgar talking to a sentient book about strange magical anomalies he came across. I always loved anthologies, so I figured it would be a fun way to tell interesting ideas. But it didn’t have much steam to it as I could only come up with a handful of concepts truly worth digging into. (Plus, the anthology is a really, really overdone concept in podcasts, I’m afraid.)

It wasn’t until my love of Terry Pratchett was rekindled by watching the BBC adaptation of Going Postal that it convinced me to make something close to the spirit of what he was doing. 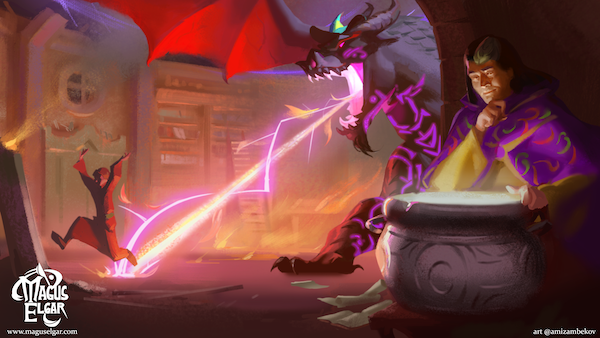 Rabid dinosaurs made out of breaded nuggets, dead space whales, portals to dimensions of madness, and one very, VERY exhausted Narrator who can barely keep up. (He actually nearly dies a few times in our show.) All taking place on the banana-shaped world (planetain) of Hearth.

A good audio drama is one that manages to keep you coming back. Much of the old serials back in the day clung to the age-old, cheap cliffhanger of “WILL THIS BABY EXPLODE?! FIND OUT NEXT TIME!” But nowadays, such things come off as a bit hokey. It’s one of the reasons I use it as a bit of a joke, mostly because I don’t mind being a little hokey if it’s amusing.

The best audio dramas out there have people passionate about their performances. They don’t have to necessarily be good, just passionate. I can’t tell you how many shows I listen to with people who have never acted a day in their lives. But because they are really into what they’re doing, it’s like watching a budget stage play at my local theater.

In terms of elements, a good script and clever sound design will get you very far. Music and good acting can sometimes be icing on the cake, but it is invaluable when you have the money (or the skill) to pull those off.

What makes audio a great medium for sci-fi and fantasy?

Books have always served as a kindling to imagination, and while cinema is such a delightful culmination of all forms of expression, it takes away the audience’s ability to picture the scene for themselves sometimes. The beautiful thing about audio is that it allows you to tap into that imagination, but still provide something very close to what movies and television provides.

In audio, fantasy and sci-fi can still provide a lot of audible context without sacrificing the audience’s ability to project their own imagination into the story. Not to mention, the nice thing about doing audio for fantasy and sci-fi is that it’s never going to be dated by poor special effects or budget sets (and we don’t have to pay for them either!). 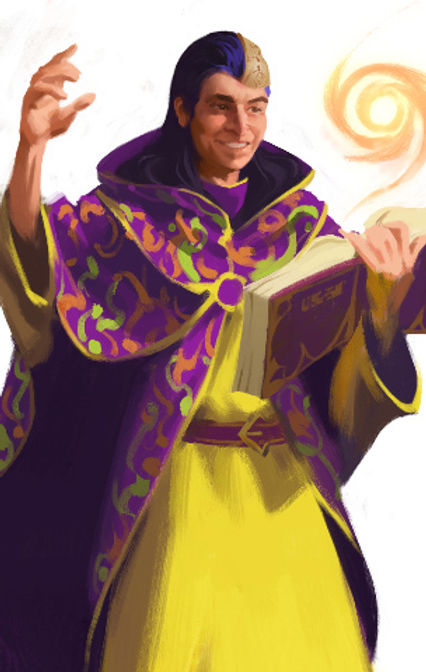 How do you make the story come to life for listeners without visuals?

So much of what we do when we listen involves what we DON’T hear as much as what we do. People tend to tune out the information that’s not important, but that’s not the same as not having it at all. We expect the sounds we plan to tune out. Without them, it feels off or strangely barren.

Without visuals, all those tiny sounds that help paint a scene make all the difference. You might imagine the sound of distant birds or grass crunching on your feet don’t contribute much to painting a picture in your head, but you can tell a great deal of a story just by the subtle backgrounds, or things that aren’t explicitly described.

Case in point, in one episode of Magus Elgar, Elgar creates a balance potion and puts it away in a drawer, only for another character (who Elgar had made it for) to find it and promptly throw it away, not realizing what it was for. See if you can notice the detail in the show!

I’ve learned a lot about managing dozens of people and how best to record those environments in a way that was more budget-friendly.

Another thing that I feel was a big mistake was not introducing our main villain until very late in the show. I was so afraid I’d lose my audience with the various complicated ideas I was presenting with my magic system, with Hearth, and with my blend of science and magic getting tossed in there, that I spent a few episodes introducing my world. Something I won’t be as worried about going forward.

What has been the most rewarding part of making this show?

I have a godson. He was around 5 years old when I first released Magus Elgar. When I offered to show him what I did, his eyes lit up and we listened to the first few episodes together. To hear him actually laugh at some of the jokes I made was just… It is an experience I seldom get to share. I’ve had people approach me and tell me how clever, how exciting, and most of all, how fun the show is. And that’s truly something that makes me feel like I have purpose in life.

What advice would you give to creators interested in making their own audio drama?

It’s not going to be pretty at first. It’ll be rough, it’ll seem like a mess, and it’ll be frustrating when you find yourself staring at that paltry view count at 3 AM. But keep at it. You’re not making this audio drama to make money or become famous. You’re doing it because you got a story to tell. And if you can get a handful of people that really love what you do, you’re doing it right.

Do you have any pet peeves in making audio?

Something I really don’t like is when an audio drama treats its audience like they can’t figure out what’s going on by just the sound design. Some shows will go to painstaking lengths to describe exactly what a character is doing, and then follow up with perhaps one or two sound effects to relay that further.

Envelop your audience in sound. In many cases, there is precedence to show and tell. But trust your audience to use their ears; they’re smart cookies.

I’ve followed some of the works of TFN for a while. I was in college when I first watched The Gamers: Dorkness Rising, and I still get a kick out of Dark Dungeons. Now that I have the chance to show my own work among them, I really want to stretch my ideas and the world of Hearth far and wide.

What else can fans check out?

If you like Magus Elgar, I HIGHLY recommend you check out the other show I am working on that will be released later this year. Clutch! A Kobold Story will take place in the same universe as Magus Elgar, but many years before. It’s about three kobolds going on an adventure to find a new dragon master after accidentally killing their old one. It’s following the spirit of Terry Pratchett’s Discworld, where the world of Hearth is not contained to just one person, but can hold stories all over the Planetain. You can learn more (and meet the kobolds) at https://twitter.com/clutchkoboldz.

How can listeners stay connected with you and your shows?

Follow us on Twitter! Sometimes we’ll post updates about what we’re doing, fun facts about the world, and even when you can stream alongside the creator and watch it with him on Twitch!

If you want to support us, the best way to do that is to share our show, and talk about it. We do have a merch store, but mostly we just want to get the story out. So that once we get a season 2 Kickstarter going, we’ll have plenty of people willing to help us make that a reality!

Michele has been writing and editing professionally since 1997. In 2017, she launched full-time into her own copywriting and editing business, serving marketing firms, service businesses, nonprofits, book publishers and consulting firms, as well as indie authors. She serves as Editor of the science fiction website Recursor.tv and The Fantasy Network News. Michele is also co-founder of Writing Well Creative Writing Workshop and a partner in Three Point Author Services.
@chippermuse
Previous Outlawed Faith: Sci-Fi Western Now on TFN Audio
Next A Chat with Daniel Nichols of the HappyGoLukky Podcasts