TFN Audio is officially live, and the first show making its debut as of March 9, 2022 is the fabulous, entertaining DICE TOWER THEATRE: DAWN OF DRAGONS, an audio adventure from Dice Tower Theatre. Headed by Mike Atchley and Daniel Nichols of Good Ham Productions, Dice Tower Theatre: Dawn of Dragons promises family-friendly adventures that you won’t want to miss if you love tabletop gaming and programming inspired by it. (Think The Adventure Zone narrative storytelling fit for the whole family.) 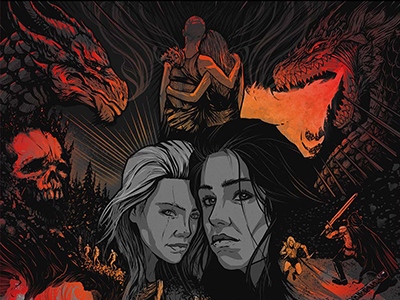 Originally created to record a collaborative roleplaying game, Dawn of Dragons has grown to include over 80 voice actors, original scoring and sound design, resulting in hours of quality entertainment.

The show’s concept is what you’d expect from a great fantasy production—with magical powers, fantastical creatures, sword-fighting, and the threat of darkness forcing heroes to team together and rise to stand as champions for good.

“There’s no dice fall,” explains Atchley. “This isn’t an actual play podcast. This is just the story we created from the game table. Expect powerful dragons, valiant heroes and heroines, adventure and even romance. Remember, clean doesn’t mean it’s not exciting! It just means you don’t have to turn it off when your mom walks in the room.”

DICE TOWER THEATRE: DAWN OF DRAGONS begins with the destruction of OallEnAkhan, the once home of four budding heroes—Cordelia the fire mage, aspiring knight Benedict, bright-eyed mariner Zorin and the deadly swordmaster Sophie. As they grow and train with Elloveve Hawklight, a secretive yet legendary elven scout archer, the local Justice, Lord Pallus (Zorin’s father) expands his Dark Army, which grows increasingly more powerful with the addition of a cruel dark cleric serving an evil queen of death along with her legions of dragons.

When the four heroes find themselves escaping the ashes of yet another lost home, they set out to seek a way to overcome the evil magic that threatens their land. Along the way, they find themselves on a search to befriend dragons of virtue who might be willing help to turn the tide.  All knowledge has its price though, and Cordelia must pay for it by recording her own story, while reliving the worst night of her life all over again.

Rooted in real-life events and discoveries

Beyond its birth in roleplaying storytelling, creator Mike Atchley says the DAWN OF DRAGONS story focuses on real life, offering heartfelt lessons and growth that listeners can relate to.

“This show is the story from a game that helped us overcome many hard, life-changing events in our own personal lives,” says Atchley. “These were our own demons to conquer, I suppose, with some players being in their early twenties and others in their forties, from all different walks of life, all coming together to play a game we grew to love. This made the show as diverse as our players, and I’ve had the pleasure of having a wonderful group to story-tell with. There’s a little something for everyone along the way, and we hope listeners will join us in our adventure.”

It’s a ride that the whole family can enjoy while listening to every episode, which are being released twice weekly on TFN Audio.

Michele has been writing and editing professionally since 1997. In 2017, she launched full-time into her own copywriting and editing business, serving marketing firms, service businesses, nonprofits, book publishers and consulting firms, as well as indie authors. She serves as Editor of the science fiction website Recursor.tv and The Fantasy Network News. Michele is also co-founder of Writing Well Creative Writing Workshop and co-founder of Two Birds Author Services.
@chippermuse
Previous RPG Storytelling: Chat with Mike Atchley of DAWN OF DRAGONS
Next Building Worlds for IP Pitching: FINAL IMPACT COMICS