In one of the coolest d20 Modern evolutions ever, new gaming company Evil Genius Productions LLC, a Black-owned game publisher helmed by David Scott, is slated this year to launch a modern-day roleplaying game called “Everyday Heroes™” —  which blends key d20 Modern elements such as the basic classes with several new subclasses, a new wealth system, and a fully revamped chase mechanic to create a fresh take on this fan-favorite tabletop roleplaying game. 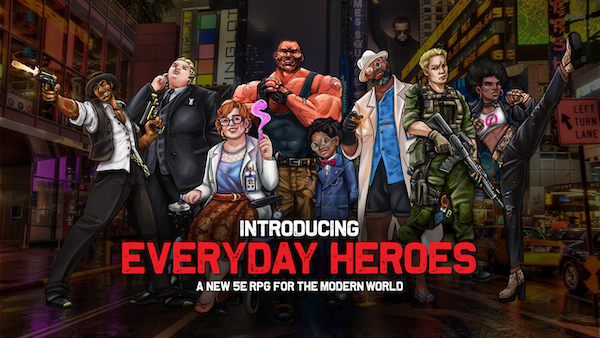 Originally released 20 years ago, d20 Modern was one of the first and most popular roleplaying games set in the current day. Over a four-year lifespan, the system released 11 expansions. The game also created an explosion of third-party products that complemented the original game, designed by Bill Slavisek, Jeff Grubb, Rich Redman, and Charles Ryan. Grubb has also joined Evil Genius Production’s design team to create the new “Everyday Heroes” game.

David Scott recently shared with The Fantasy Network what inspired Evil Genius to create “Everyday Heroes” and what gaming fans can expect when the Kickstarter launches this spring.

TFN NEWS: What inspired you to create/launch Evil Genius?

DAVID SCOTT: When the other kids wanted to play Dungeons & Dragons, I wanted to play Champions. I always loved modern-day RPGs. So when d20 Modern came out, I fell in love.

Because I’m the guy who likes to sit at the back of the movie theater and yell at the movie screen:

“Don’t let him escape; he will come back in the sequel!”

“Why are you kissing? There are only three seconds left on the bomb!”

So, I decided, maybe I should be my own hero like in the action films I love. That was the spark that ultimately led to Everyday Heroes: The RPG for the Modern World.

What was it like launching in 2021, during a pandemic?

Launching during the pandemic was fine. It gave me permission to hire staff no matter where they live. Right now, our team is distributed and with the magic of tools like Discord, we never miss a beat. I haven’t met most of my staff in person, and we’re already fast friends. We work great together.

What are some of the influences your team has had in mind as you’ve developed “Everyday Heroes”?

We were inspired by every action movie we watched as kids. Movies like Rambo: First Blood, Under Siege, Passenger 57, Collateral Damage, and many, many others. We set out to create a roleplaying game that allows you to play out those movies with your own heroes, making your own decisions.

We were also motivated by great video game RPGs like Uncharted, The Last of Us, and Tomb Raider, which have found the perfect formula for modern-day RPGs.

Evil Genius Productions describes itself as Black-owned. What has it been like to start a gaming business from that place?

Evil Genius identifies itself as a Black-owned company. And people’s reactions to that have ranged from “thank you for being a part of this industry” to “why are you playing the race card?” But I thought it was important to self-identify, particularly during Black History Month, because people of color have to know that they can start gaming companies, create great games, and be a welcome part of this community. 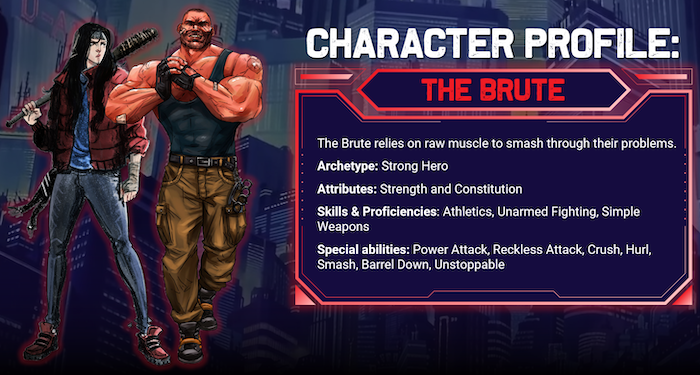 In terms of creating modern RPGs, what do you see as the unique value (and challenges) of updating the genre to a more modern feel?

The world has changed since 2002 [when d20 Modern first launched]. Now you can order anything online and have it at your house the next day. Everyone has the power of the internet in their hot little hands. Security cameras no longer record on VHS tapes. These types of modern marvels completely change gameplay and were a challenge to design around.

How has tabletop gaming been meaningful to you personally over the years?

I love tabletop gaming above all other forms of entertainment. As an introvert, I think of game nights as structured social interactions. During COVID, this is the one thing I missed and couldn’t really recreate online in a satisfying way.

But the community is very important to me. I’m now going on thirty uninterrupted years of going to Gencon. I enjoy catching up with the friends I’ve made along the way.

What was the first tabletop RPG that you played? Any fun memories of that game that you’d like to share?

I remember the fateful day when I was at sleepaway camp, and I was first introduced to Dungeons & Dragons. The campers were running “Return to White Plume Mountain.” After that, I was forever hooked. I believe I was 10 or 11 years old, and from then on I was a convert.

What do you hope to see happen once the fresh take of d20 launches out into the world? What’s the vision and mission you’re aiming for?

I really feel that there is a hole in the market for a really robust, modern-day system. What D&D does for fantasy and Star Wars Roleplaying Game does for science fiction, I hope that this becomes the de facto system for the modern-day role genre.

By the way, no disrespect to the other modern-day systems—my team loves playing World of Darkness. I understand that many of them are really good, but my vision is very different. I look forward to laying out that vision in the coming months.

Everyday Heroes™ from Evil Genius Productions will be coming to Kickstarter in the Spring. Here is the link so you can stay tuned!

Michele has been writing and editing professionally since 1997. In 2017, she launched full-time into her own copywriting and editing business, serving marketing firms, service businesses, nonprofits, book publishers and consulting firms, as well as indie authors. She serves as Editor of the science fiction website Recursor.tv and The Fantasy Network News. Michele is also co-founder of Writing Well Creative Writing Workshop and co-founder of Two Birds Author Services.
@chippermuse
Previous Behind the Scenes with the Cast and Crew of Shiny New Things
Next TRAILER: Gleahan and the Knaves of Industry