Fans of Shiny New Things have good news coming… The latest episodes in season one are here, and they’re available on The Fantasy Network. If you haven’t heard of Shiny New Things yet, you’re in for a treat. Set in the near future, where a new government order has divided society, where poorer people find macabre work portraying the dead loved ones of uber-rich people, the series uniquely explores power, vengeance, and sacrifice in an uncertain future. 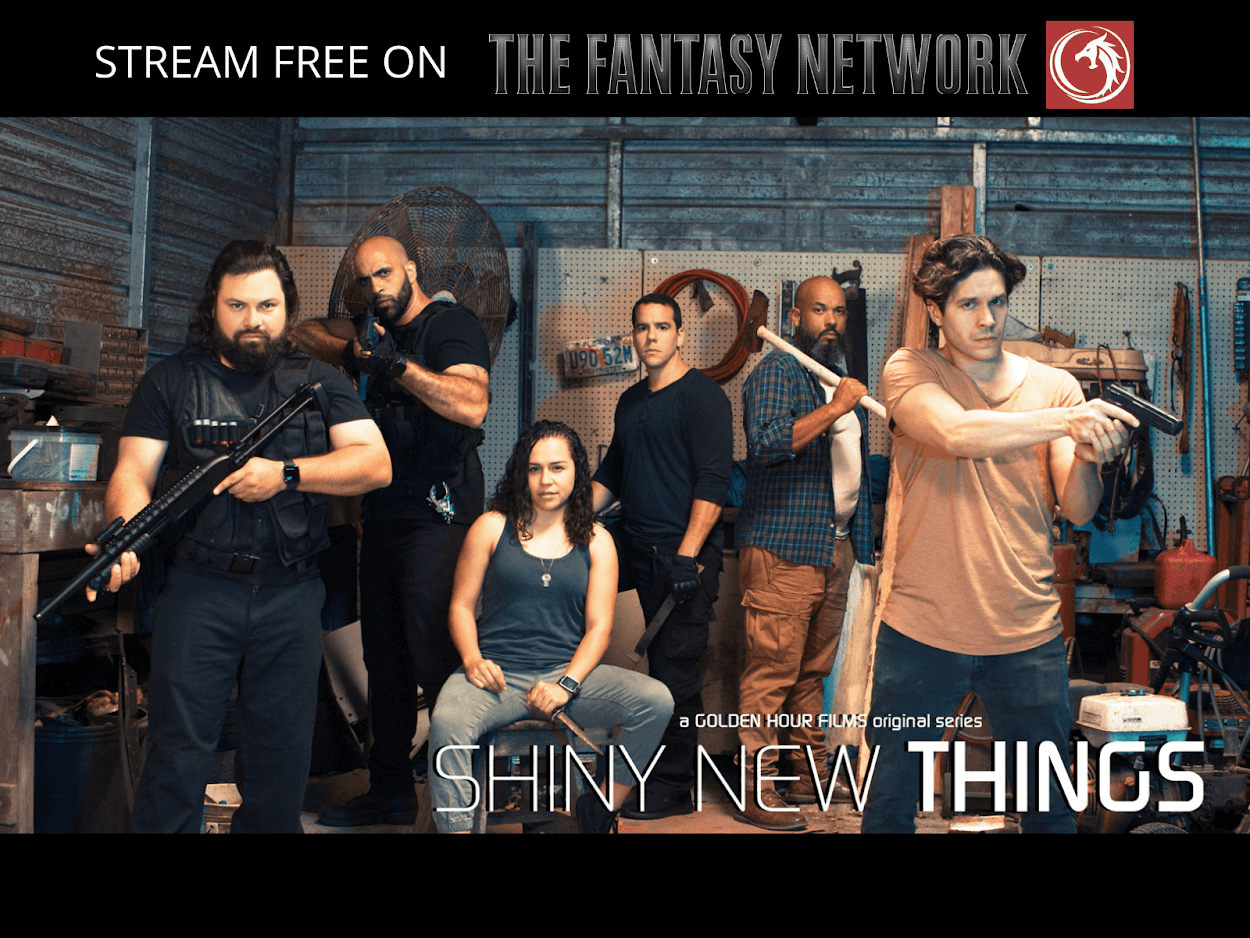 While the series was launched pre-Covid, the sense of dystopia that runs through the story of Shiny New Things season one feels completely relatable in today’s world. Producer, director and writer Lakeisha Jackson was inspired to create the show based on a strange dream she had, but the roots of it feel all too relatable. After a long break due to the pandemic, the remaining episodes season one are finally ready to make their debut to sci-fi dystopian fans everywhere.

Here’s a more in-depth look at how Shiny New Things season one came together, with insights from series creator Lakeisha Jackson. (And be sure to check out her previous interview with TFN News too, to learn more about her filmmaking journey.)

TFN: What can fans expect from the latest episodes of SHINY NEW THINGS (SNT)?

JACKSON: Be prepared for surprises! Expect to see our group finally come together.

And watch for breadcrumbs. They are there from the very first episode and not a lot of people pick up on it—which I like because when it’s pointed out, people are usually like “OHHHH, but, wait…” And then they have a ton of questions that I refuse to answer because it all is revealed in season 2.

What does it take to make a project like Shiny New Things (season one) come to fruition?

That’s a big question. In hindsight, I guess the most important thing to help a project like this get done is believing in it enough to fight to complete it. Then, surround yourself with people who believe in the story first and then you second. There are going to be days when you want to give up, but watching others discuss your ideas and concepts with passion and desire will refuel you on days when you feel empty.

Obviously, to make the show come to life, you had a team to work with. How was the process of collaboration?

My “official team” consisted of myself and my first AD (assistant director) Chris (Martell). I split myself into 10, and he split himself into 5. It was grueling and hard, but we pulled it off.

Now, unofficially we had many of our cast show up on a consistent basis to help do other jobs, including my family. Then there’s Ronald Reyes, for example. He plays the character Sanchez in the series, and his parents owned a farm in Palm Beach county. They allowed us to essentially turn their 10 acres into our own private backlot. He also worked a full-time job and came to set to do everything from grips, to PA’ing (being a production assistant) and slating and booming.

The same was true with Melanie Tonkin, my MUA (makeup artist) who showed up to PA, and Jason Menz who plays Tom, who not only PA’d, but also did some background work in episode two’s opening scene. Hugo Fuentes, who plays James, also worked as grip, slate, PA and allowed us to film in his apartment. Annette Farkas opened her homes, Barbara Ryan opened her home on multiple occasions, as well as her family and friends, and local businesses, to allow us to film…

The love has been amazing, and unconditional. They are heaven-sent. That’s the only way I can begin to describe these amazing people. I will never forget what they did for me. The fact that these “strangers” essentially saw in me what I struggled to see and gave me the confidence to follow this crazy dream… I will forever work with these people and love them for the love they showed me.

You wrote and directed SNT, two different types of creative work. Do they go naturally together for you? What advantages have you found in doing both?

I love both processes equally and because I knew my story so well, when issues arose during the last months of filming, it was somewhat easier for me to fix things on the spot rather than having to spend time consulting with others about their thoughts on a decision. I think both processes work naturally for me, for sure.

Now, that’s not to say that I wouldn’t allow someone else to direct an episode or possibly write an episode. It would depend on how their past work and whether we had the same goals and visions. My goal is to have a real writers’ room for SNT, but it would really depend on many factors.

What challenges did you face in making SNT happen?

The biggest challenges were definitely related to budget. What I didn’t have in budget to pay for, I taught myself how to do in order to get it done. What money I did have, I put in places where it was needed to pull off the scene and make the story cohesive.

How did you handle those challenges?

One way I tackled the challenges was to always be transparent with my cast and crew. They knew the budget for craft and when I didn’t have it, they stepped in a lot to provide when I couldn’t. There were a couple times I left the SSD needed to record at home and Ronald Reyes came to the rescue and purchased what was needed in order to not ruin a whole day of filming. And he did this on days when he had nothing to shoot. He could have been doing anything, but he chose to be there with us. When I think of people like him, I can’t ever fix my mouth to give up. They didn’t do it to me, so how could I do it to myself?

Where would you like to go next with Shiny New Things?

There are at least three additional seasons of material I’d like to film in order to bring this show to a close, but I’m open to any and everything. Nothing is off the table.

Be prepared for the hard days, because there will be days that go smoothly. These will be few and far between, so don’t get rose-colored glasses. Believe in what you’re trying to do and make sure it’s for the right reasons. If you’re looking to be a celebrity, this is not the path to do it. Put your money in the right places, be firm in your intentions, and most importantly—don’t ever give up.

Michele has been writing and editing professionally since 1997. In 2017, she launched full-time into her own copywriting and editing business, serving marketing firms, service businesses, nonprofits, book publishers and consulting firms, as well as indie authors. She serves as Editor of the science fiction website Recursor.tv and The Fantasy Network News. Michele is also co-founder of Writing Well Creative Writing Workshop and co-founder of Two Birds Author Services.
@chippermuse
Previous Succubi Hunters! HUNTRESS Comes to TFN Jan 8!
Next Behind the Scenes with the Cast and Crew of Shiny New Things