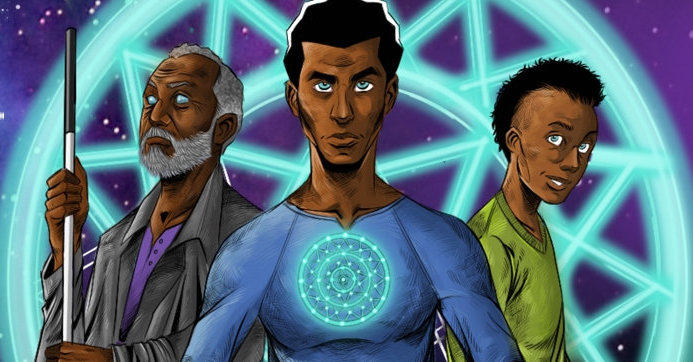 Michael, who suffers from continuous nightmares, is given a “special” dreamcatcher that gives him some amazing powers. With the help of a few friends, he goes face to face with an evil group of entities called Azithoth, whose mission is to invade the minds of humanity, causing horrible nightmares and psychological pain. But before Michael can defeat them, he must first defeat his greatest enemy, himself. Will he succumb to his fears, or will he overcome them and gain total lucidity?

That’s the premise of Lucidity by creator Brian Badgette, which earned accolades as one of the winners at the 2021 New Jersey Film Festival. Lucidity is coming in animated video form to The Fantasy Network, and to kick off the celebration, we chatted with Brian about his comic art and writing, creative vision, and inspirations for the story.

TFN: Tell us how you got into filmmaking, comics and storytelling.

BRIAN: I got into filmmaking, comics and storytelling at a very early age, like around 5 years old, with cartoons and shows like Looney Tunes, Power Rangers, Teenage Mutant Ninja Turtles and others from that era.

My dad said that when I was young, I asked him “Where do the cartoons go when the show ends?” He laughed at such an existential question being asked by a 5-year-old and explained that they are drawn. He traced a Power Rangers coloring book cover and I thought, “What kind of sorcery is this?” From there, I became obsessed with drawing and eventually film.

I loved (and still do love) Jim Carrey’s The Mask, and used it to make my own first short story. As the years grew, I would watch bonus features from my favorite DVD movies—long featurettes showing how they made the film from script and story development, costume design, set production, the score, etc. I would study them and skip class so I could sit down and think of how I would make my own movie for the characters I loved.

What inspired the story of Lucidity?

Lucidity was inspired by learning about lucid dreaming, which is to know you’re dreaming while you’re dreaming. My dad and I were obsessed with The Matrix series. I was 16 and on the journey of self-discovery, and that movie touched on a lot of questions about the nature of reality. Plus, the groundbreaking effects and story really moved me. I remember telling my father how I wish I could fly and do things like Neo. He said, “You can,” and broke down lucid dreaming.

I became fully obsessed with it. I studied it day in and day out and read anything I could find about the subject. As I became more experienced with having my own lucid dreams, I thought how cool it would be to have a character based on the subject. I knew it had potential because, unlike being an alien from another planet or being bit by a radioactive spider, this is something people could actually do. It’s tangible.

What is it about the SFF genre that attracts you? And how did this genre lend itself to the story you’re telling in Lucidity?

I love the SFF genre because the foundation of it is imagination—which means you can take the story wherever you want it to go. And based on that foundation, you can create a story that still resonates with people and feelings they feel in the real world. Batman and Spider-Man deal with trauma, Superman is a fish out of water story (which is how I felt in high school, lol). The Matrix deals with the idea of purpose and the power of choice. The Wizard of Oz too.

All of these stories are embedded into Lucidity. The story of purpose, trauma, sacrifice along with the challenge of overcoming them in a strange new world is the foundation for the show.

How did you come to the decision to turn this story into a motion graphics comic?

When it comes to print, you can’t turn the volume up on a page, and I don’t have the funds for a live action series or film. Lucidity‘s foundation is obviously based in the comic book world, but I always saw it as a very detailed storyboard. I originally released it as a web-comic in 2015 but something didn’t feel right. I knew that if I could add motion, voice actors and a score, it would take it to the next level.

The goal was for the viewer to play the film but only have to look at the comic. The movie would give them the sound effects, dialogue and music. I felt that if I see it as a movie or series, then I should present it as such. Motion graphics provided a way to do that.

My collaborator Apostolos was a game changer. He saw my vision and brought it to life.

You both wrote the story and drew the art. Do you like one of those creative efforts more than the other?

They both present their own challenges, but drawing is always more natural for me. I’m a perfectionist, so every episode of Lucidity I look back on, I’m always noticing what could be better. The bright side to that is I think viewers will appreciate the artistic growth that comes with each episode.

Writing the story was way more difficult. I took a 4-year hiatus from the comic. Even though the web comic was released in 2015, I quickly lost my drive, and then I realized it’s because I didn’t know my characters well enough. Sure, you can add all the cool things that come with making a superhero story, but I realized the real reason why I loved my favorite heroes was because of the story and character development.

So, I studied what makes a great script. Protagonist and Antagonist. Neo and Smith. Luke and Darth Vader. Woody and Buzz, lol. I read Joseph Campbell’s The Hero’s Journey. Now I have a clearer vision on where I want to take the show. Now I love developing the story…but drawing it is always more fun. 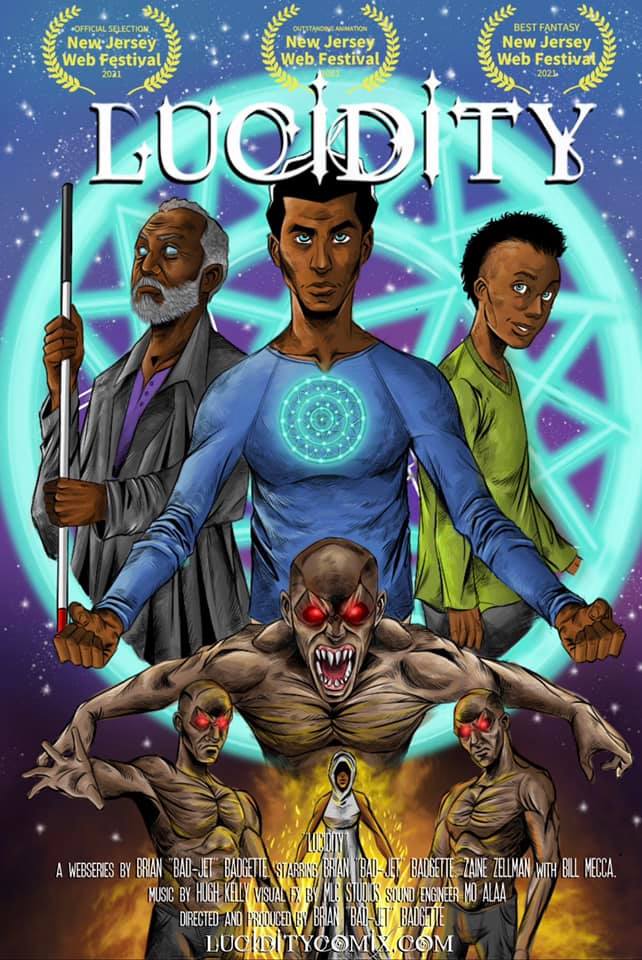 To make Lucidity come to life, you worked with a team. How was the process of collaboration?

It was a bit of work. The vision was there, but finding the right people to make it come to life was a challenge. I worked with a few motion graphic artists, but once I found Apostolos and worked with him, that developed a great artistic relationship.

As far as voice actors, it was fairly easy. I really believe in letting the actors bring what they feel is best for the character. I give them an idea for the pacing and the voice I’m looking for, and eight times out of ten, it works out.

The music can be challenging because Lucidity could have five different tones in each episode. It could go from action packed to more mellow, but the transitions have to make sense. The score takes a little more effort but because it’s one of the most important elements of the episodes, it’s worth the effort.

What does it take to make a project like this come to fruition?

A LOT of planning! You have to know exactly what you want. The beautiful things are when your collaborators add their own flair, and it works out.

One of the biggest challenges is making all these elements work fluently but also just drawing it—pacing and knowing when to add the action and when to add the character growth and exposition. But I look at it as if I’m a composer. It’s my job to create a symphony out of all these different instruments.

Talk a bit about the financing side of things. How did you fund the project?

All of Lucidity is paid for all out of my paychecks I get from my 9-to-5 job. I’m just a mild-mannered storage salesman, so episodes can take a long time to create. This is also why I took over a year to create six solid episodes. That way, when I released them I could take my time and not be pressured by making them back-to-back. Episode 7 is in development right now.

Where would you like to go next with Lucidity?

The goal is to eventually make Lucidity into a live action or animated series. Animation is the best choice, but it would have to be on the same level of Spider-Man: Into the Spider-Verse or Love, Death and Robots. A feature film could work, but I feel we would have to condense the story too much. It would have to be a really great script.

For now, I’m just focused on getting more episodes of Lucidity out there. The story is getting more complex, and I’m going to show a lot of exciting back-stories for other characters like Michael’s dad, John. I can’t wait for viewers to see that one.

Any other projects you’re working on right now?

I’ve been writing a comedy script called Game Boys. It’s about four friends who have been playing online games for years and finally decide to meet in the real world. It’s still in development. Besides that, I always wanted to tell untold African American stories in history in a similar format that Lucidity is made in now. That’s way down the line, though.

What advice would you give to others who want to make their own film, comic, show, etc.?

That’s a great question. It sounds corny, but you really have to believe in yourself. You have to be a bit crazy too. You have to believe in your project and work on your craft. Be original because we’re living in a time where people’s attention span is shorter than ever. If you don’t grab them in the first three seconds, the audience will scroll on. And even if they do love it, they will be wanting the next one just as quick.

Don’t be in a rush to get your work seen. I had episodes of Lucidity that I had to sit on, even though I wanted to show the world what I was doing. But that instant gratification is temporary. Take your time and make sure your project is ready… But you have to believe in it for it to work.

To learn more about Brian Badgette and Lucidity, visit Luciditycomix.com.

Michele has been writing and editing professionally since 1997. In 2017, she launched full-time into her own copywriting and editing business, serving marketing firms, service businesses, nonprofits, book publishers and consulting firms, as well as indie authors. She serves as Editor of the science fiction website Recursor.tv and The Fantasy Network News. Michele is also co-founder of Writing Well Creative Writing Workshop and a partner in Three Point Author Services.
@chippermuse
Previous This Holiday Season, Give Someone the Gift of Fantasy
Next Succubi Hunters! HUNTRESS Comes to TFN Jan 8!