Fans of Conan, Mad Max, Hellraiser, Fist of the North Star, Berserker, The Metabarons and similar dark post-apocalyptic fantasy tales, it’s time to get excited about the latest graphic novel in the genre, the epic and superbly inked story RIVALS, by artist Paul Gerrard and writer/director Mike Clarke. The epic’s Kickstarter is live now, with lots of great perks for supporters to enjoy. 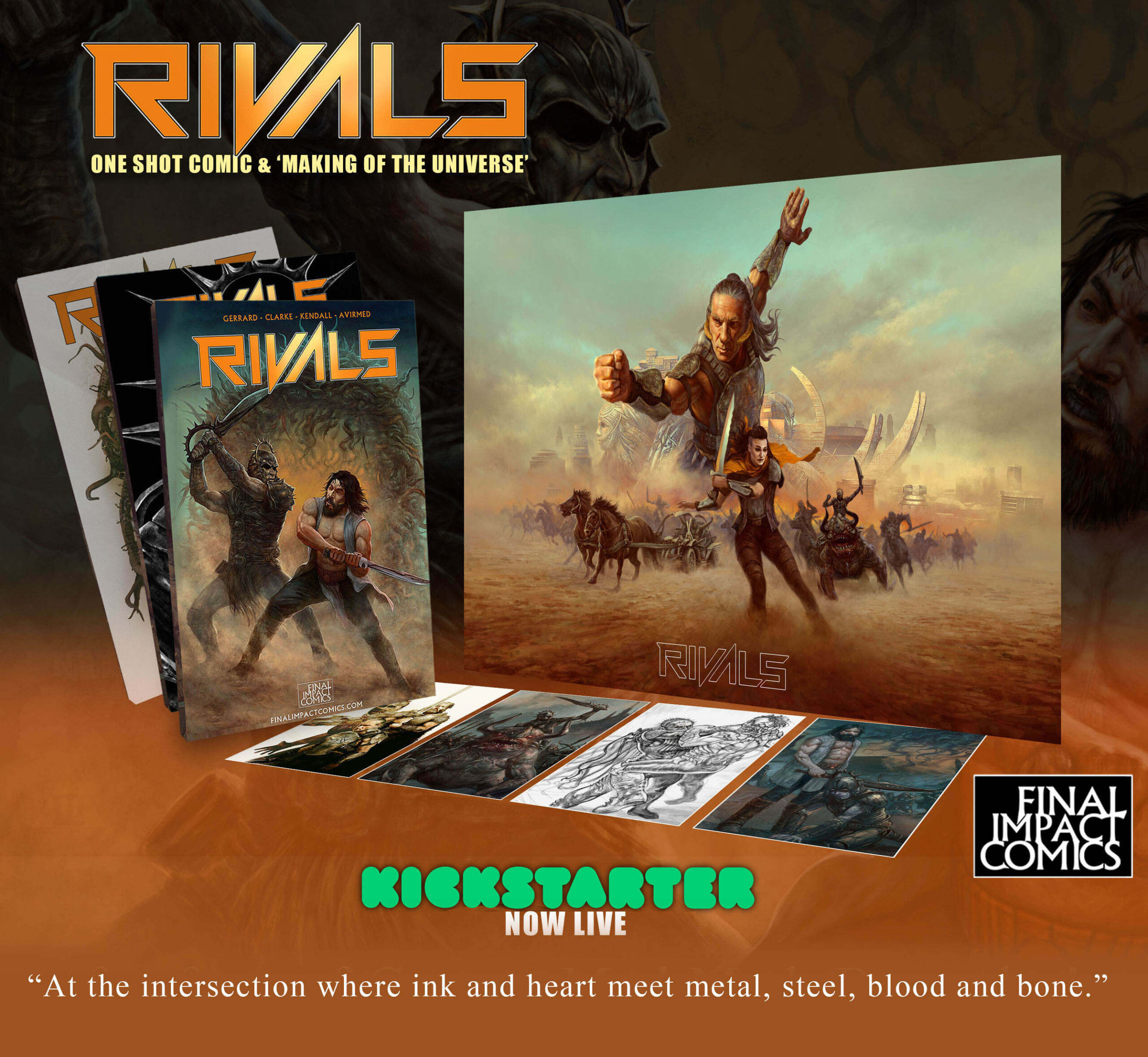 Set in a medieval and dark fantasy world with post-apocalyptic overtones, the story or RIVALS revolves around the character Sago Astar—a fight trainer and guard to the leader of Jaan City, Sword Dorn Haath. Though it is a fortified emporium and the one true stronghold on planet Alter, Jaan City is under constant threat from the leaders of the planet’s other six large cities , including the Gokin—a biomechanical and weapon-fused race, and the Dark Mizus amongst many other horrors. RIVALS is a new action-packed and epic saga to rival all others.  Prepare for war and adventure, for it is coming in droves!

At its heart, “the story of RIVALS is about overcoming any obstacle if you stay true to your path,” says Gerrard. “Sago Astar, our main hero, is the last honorable warrior amongst a planet of cut-throat warlords, cults and biomechanical barbarians.” 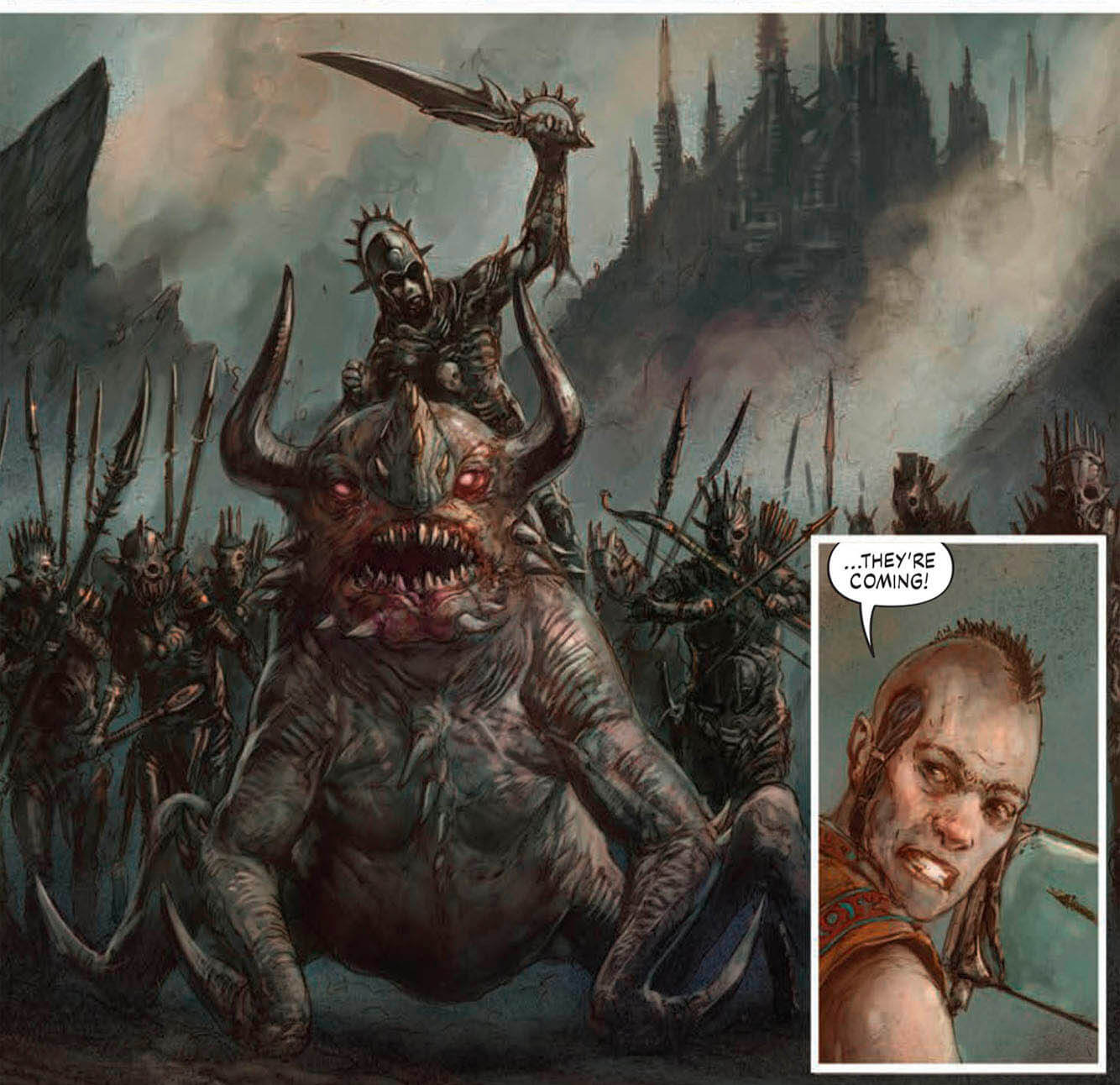 The role of Sago Astar is inspired by actor and action icon Gary Daniels, who is consulting on the martial arts and spiritual side to the character. “Gary played Kenshiro in Fist of the North Star amongst a long line of action film hits,” explains Gerrard and Clarke, who want to see the actor eventually play the character for real, in a TV show they are currently developing.

The Kickstarter features a one-off comic that gives life to the world of RIVALS, and serves as a great introduction to the characters that Gerrard and Clarke are aiming to bring to TV and gaming. The artwork, story lines, and concepts all hearken back to classic films and stories, with a modern twist.

“We have both been fans of post-apocalyptic and dark fantasy films from the 80s and early 90s, coupled with Hong Kong action cinema and good old violent Manga,” says Gerrard. “Rivals is a huge nod to those times.”

This love letter to classic action cinema and fantastic horror is evident in Gerrard’s stunning artwork, promising a great addition to any comic fan’s collection. 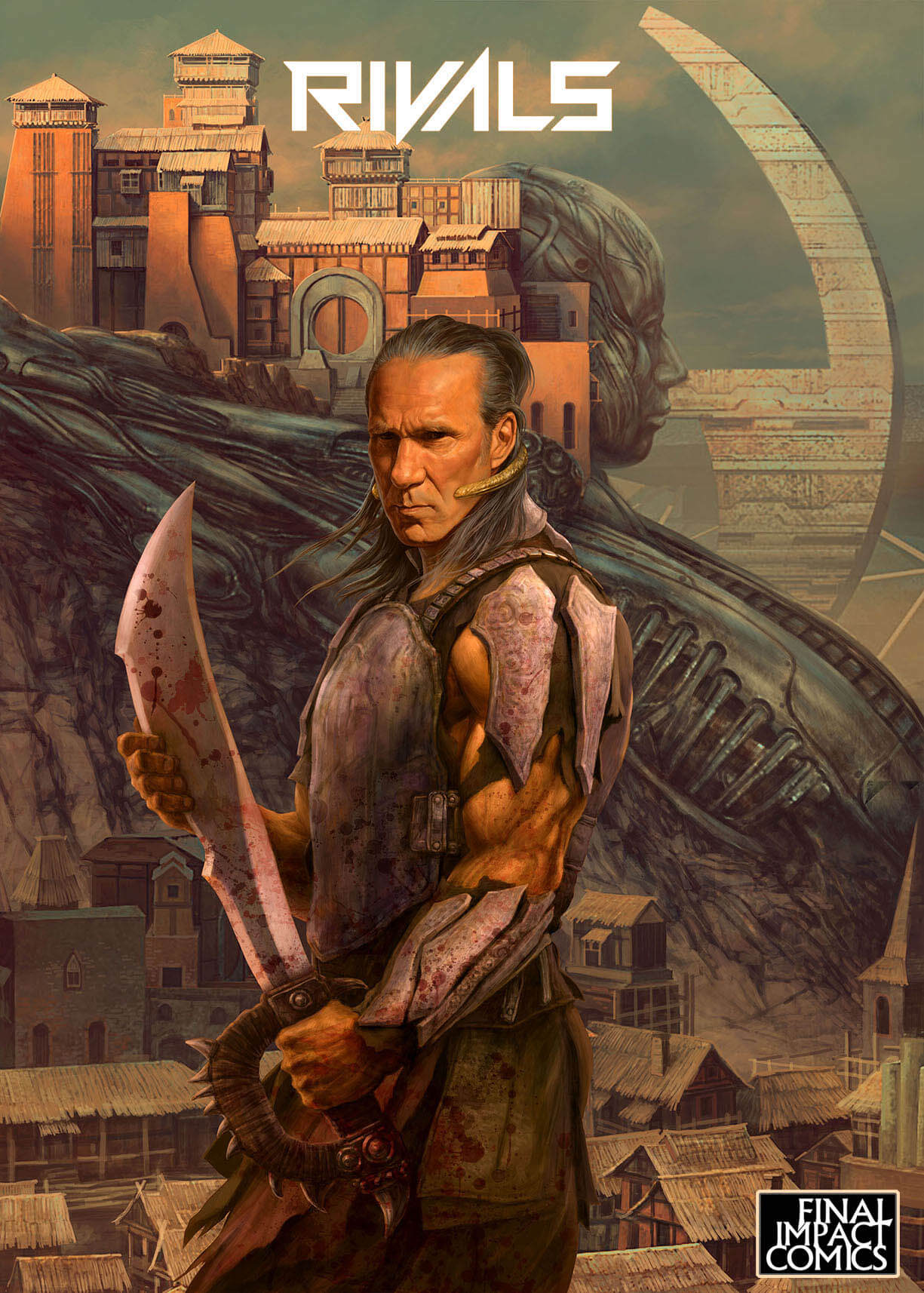 The genius behind the artwork is Gerrard, who has been described as the bastard child of H.R Giger and Clive Barker. Gerrard has been creating art and character designs for film , television and games for over 15 years. Moody, tense, imaginative , disturbing, epic are just a few common terms to characterize his work, which includes well-known projects such as The Shannara Chronicles, Evil Dead Rise, Hellboy, D&D, Masters of the Universe reimagined series, and more.

Once the Kickstarter is funded, Gerrard and Clarke have plans to expand their comic universe with other graphic novel series, a RIVALS board game, a live action TV show, and a game version for PS5 and XBOX.

Don’t miss out on participating in the Kickstarter, because some of the rewards are pretty darn cool. “The BE A RIVAL option is particularly fun.” says Gerrard. “We will take your image and draw a character in a future issue based on your likeness. You could be a warrior, a killer or a head in a bucket :).” What’s not to love about that?

You can learn more about the project and back the Kickstarter here—funding is live through November 23, 2021.

Michele has been writing and editing professionally since 1997. In 2017, she launched full-time into her own copywriting and editing business, serving marketing firms, service businesses, nonprofits, book publishers and consulting firms, as well as indie authors. She serves as Editor of the science fiction website Recursor.tv and The Fantasy Network News. Michele is also co-founder of Writing Well Creative Writing Workshop and a partner in Three Point Author Services.
@chippermuse
Previous Phantastes: A Gorgeous Visual Feast for Fantasy Fans
Next FORGED BY FIRE: A Steampunk Comic Adventure