The Earth Moves: A Podcast Review

This review was originally shared by our partners at Recursor.TV.

Long-time listener Leo Short finally has the undivided attention of his favorite shock jock Brent Ziff. “This is gonna sound funny,” Leo cautions, but it really isn’t. Doubled over with pain in a Casper, WY, bathroom, he foretells events as catastrophic as they are implausible. 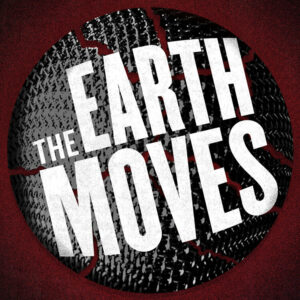 Brent humors the poor chump for some yuks… until the news reports start trickling in. The phone lines are lighting up, the earth is moving like it never has before, and there isn’t much time for these two jackasses to make a plan.

That’s the premise behind The Earth Moves, a dark comedy, apocalyptic, two-part audio drama about how even the most unwanted schmuck can still make waves. The show was written by audio-fiction juggernaut and celebrated playwright Mac Rogers, directed by Jordana Williams, and produced by Gideon Media, the company behind the hit podcast Steal the Stars. And it features sound design by Cara Ehlenfeldt (Phoebe Reads A Mystery from the producers of Criminal).

A podcast production with these top-notch credentials should be good. And it is. Listening to The Earth Moves is riveting, even though at its heart, it is simply two people talking about what is happening in the world around them as they speak.

The production features superb voice acting that makes you feel like you’re listening to a genuine talk radio show. Depending on how you feel about talk radio, the verisimilitude may make you shudder or pull up a chair with popcorn. Still, actors Abe Goldfarb (Brent Ziff) and Brian Silliman (Leo Short) capture undeniable attention with their strong delivery, believable voice characterization, and a clear appreciation for the unique plot of this short, potent tale.

As it goes, the plot concept is relatively simple, yet highly fitting to the time we live in. Long-time listener, first-time caller Leo Short is experiencing a strange connection between his personal bodily functions and the earth’s movements. His bowels and terra firma’s bowels seem linked. And the news isn’t good. The world seems to be falling apart all around them, with natural disasters that will destroy countless lives all across the globe.

It’s clear that the inspiration for the story is rooted deeply in our current situation, with COVID-19, divisive politics, war-torn countries, desperate refugees, and natural disasters revving up anxiety from day to day. Questions like, “What’s going to happen to me? Will there be enough food and resources for everyone? How will I survive?” are on so many people’s lips.

The Earth Moves captures that dismay, as well as the underlying thought that the story’s radio host Brent Ziff, like many of us, has been thinking: I’ve just gotten my life where I want it, and now this?

With the sense of apocalyptic doom that seems to hang over our heads these days, The Earth Moves will be intensely relatable and possibly quite cathartic as you live through the emotions of Brent and Leo as they face their uniquely “unprecedented times.”

The Earth Moves premieres in two parts on Friday, August 13 and Friday, August 20, and is free on-demand to listeners across listening platforms where podcasts may be found, with distribution from public media organization PRX.

Michele has been writing and editing professionally since 1997. In 2017, she launched full-time into her own copywriting and editing business, serving marketing firms, service businesses, nonprofits, book publishers and consulting firms, as well as indie authors. She serves as Editor of the science fiction website Recursor.tv and The Fantasy Network News. Michele is also co-founder of Writing Well Creative Writing Workshop and a partner in Three Point Author Services.
@chippermuse
Previous The Strange Case of Starship Iris
Next Magic and Comedy: The Making of Magus Elgar (Now on TFN)