In the world of audio fiction, success tends to be a team effort. That’s clear in the work Travis Vengroff and Kaitlin Statz, the husband-wife duo behind Fool & Scholar Productions—an award-winning podcast network that produces horror, RPG, and sci-fi podcast fiction.

Their efforts in podcasting began simply enough, as a creative hobby they could do together. Soon, with Statz writing and Vengroff handling sound and audio design, Fool & Scholar had launched their first podcast—Liberty: Critical Research, a serial science fiction podcast about a space colony that has been cut off from humanity and is surrounded by a lawless expanse called The Fringe.

While Liberty started humbly, with just over a thousand downloads by the end of its first season, Vengroff and Statz considered it enough of an achievement to keep going. They held other jobs to bring in income, worked hard on their productions in their down time, and connected with others in the audio drama space.

“We collaborated with other people,” says Statz. “When we became better at our jobs, we started to help new creators make their shows.”

Two years ago, Statz was finally able to make the leap to full-time podcasting, followed soon after by Vengroff.

“Now we have our company, and we work full-time podcasting, and we get to create these amazing stories with millions of downloads and thousands and thousands of listeners,” says Statz. “It spiraled out of control in a good way!”

Evolving in Storytelling and Sound

Over the years, the duo’s skills have evolved since she first started producing Liberty.

“Originally we relied heavily on narrative,” says Vengroff. Liberty uses the found footage style of storytelling and what he refers to as “audio cheats”—like whispering—to create a sense of being in the room with the narrator.

“When we first started, we had not written anything before,” Statz says. “As we continued to create, I started to feel I was getting my footing as a writer. Now I feel like can take bigger steps, bigger gambles. I’m touching on a lot of topics that I wouldn’t have felt like I could have wrote about at all six years ago, because I didn’t have the technical abilities to get the story across or really work within the mind of the character as much as I can now.”

With the storytelling evolving into more complex presentations, the sound design has had to evolve too.

“It’s a lot of work,” says Statz. “You can really easily lose people when it’s just audio, because you can’t rely on any of the visual cues that flashbacks in a movie will get to use. We have to rely on sound production. We can tell you there’s an alien standing in front of you, but if they speak and they sound like a human, it’s not going to really solidify that feeling in your mind when you’re listening to the story. Travis does a great job of making the creatures sound alien.” 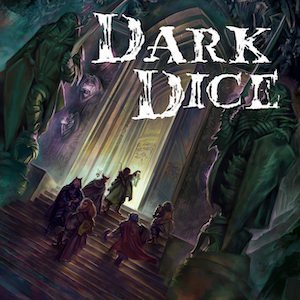 The Interplay between Creators and Fans

With an active, supportive fan base on Discord, Twitter and Patreon, you might wonder how much audience input affects where Fool & Scholar goes with their storytelling. Vengroff and Statz are aware of what their listeners have to say. If fans gravitate toward a certain character, the duo may give that character a little more time in the script.

With the scripted podcasts, like Vast Horizon, Statz normally has things outlined and planned, so there’s not as much wiggle room. But there are more chances to incorporate listener requests into Dark Dice, the team’s horror-based, actual-play D&D podcast that uses immersive soundscapes to create an added layer of immersion.

“I lean into it because I think it’s kind of fun,” says Vengroff.

“In Dark Dice, which is a live role-playing game, we have a lot more leeway,” adds Statz. “The story is so wildly controlled by the players. So, if they’re influenced by something a fan has said, there’s a lot more space for freedom.”

That includes not just comments and fan theories, but also fan fiction—which is definitely a thing Dark Dicelisteners do.

“Our latest episode has a dream sequence that’s based on some fan fiction someone wrote for our show,” says Vengroff. He and the actor who played the scene wrote out the nightmare sequence for the character. “The people who wrote the fan fiction lost their minds!”

Rolling the Dice with Jeff Goldbum

Yes—the Jeff Goldblum has appeared on Dark Dice—an enviable get in terms of actors with ties to the SFF/horror genre. Surprisingly, it wasn’t as hard as you might think to make the appearance happen. But it did take some street cred, high-quality sound and production, and persistence. 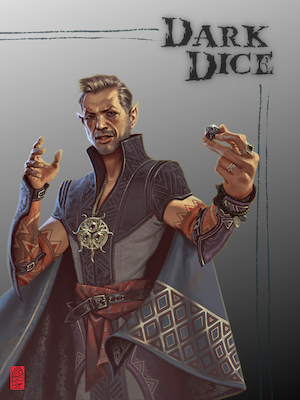 And it probably didn’t hurt that they sent him an image of him as the elven sorcerer along with his character sheet as part of the pitch.

“We’ve been doing podcasts for a number of years, and we’ve gained some notoriety in the space,” explains Vengroff. “I reached out (to Goldblum) through the proper channels (his agents and reps), and no one said no at any point. He said yes, and suddenly we were in a recording session with him.”

Dark Dice is crafted to be an entertaining story around live RPG, not just friends talking at a table—which makes it all the more cool to have an actor of this level involved.

Beyond the experience of working with a world-class actor, having Goldblum participate has raised Fool & Scholar’s profile, lending them even greater success. “It’s raised awareness of us. People are aware of D&D podcasts more. We have more subscribers and more awareness of our brand,” Vengroff says.

Fan interaction is hugely important to Fool & Scholar. Their Discord channel allows fans of each show to interact with each other. People get to ask questions, offer theories, and share what they love about the shows—which then motivates Vengroff and Statz to keep making more episodes.

“It’s wonderful to have that direct line,” Statz says. “It really is us being supported directly from the internet.”

The team uses tools like YouTube to provide more inclusivity, as some fans may find it more accessible than podcast feeds. Transcripts of episodes are available freely for those who want them, which benefits those who are deaf or have impairments with auditory processing.

“The more ways we can be out there, the better,” Vengroff says. Being accessible brings in fans of all ages, which only helps their efforts and the podcasting industry as a whole continue to grow.

“We understand our work isn’t for everybody,” adds Statz, “but we want it to be available to everyone.”

Check out Fool & Scholar Productions on their website, or support them on Patreon.

Michele has been writing and editing professionally since 1997. In 2017, she launched full-time into her own copywriting and editing business, serving marketing firms, service businesses, nonprofits, book publishers and consulting firms, as well as indie authors. She serves as Editor of the science fiction website Recursor.tv and The Fantasy Network News. Michele is also co-founder of Writing Well Creative Writing Workshop and a partner in Three Point Author Services.
@chippermuse
Previous Give Me Away: A Sci-Fi Podcast Review
Next Creative Freedom: A Take on the Ayer’s Cut of Suicide Squad