Breaking News
Home » Exclusives » Exclusive Interviews » Lizardfolk: An interview with the creators of TFN’s Roll With It

Lizardfolk: An interview with the creators of TFN’s Roll With It

Editor May 17, 2021 Exclusive Interviews, Exclusives, featured, Featured Articles, Gaming, Independent, Table Top Gaming, The Fantasy Network Comments Off on Lizardfolk: An interview with the creators of TFN’s Roll With It

What did you do during the pandemic of 2020? If you were part of the creative team known as Lizardfolk, you planned and shot a comedic look at D&D gaming. The resulting film, Roll With It, is a lot of fun—and it’s available for streaming on The Fantasy Network. The Lizardfolk team talked with The Fantasy News to share about the making of the series, love for D&D, and more.

TFN NEWS: How did Lizardfolk get started? What type of projects do you work on?

Lizardfolk started with five of us in a Brooklyn basement, playing a level one campaign in which we almost died trying to get into a rowboat. Sometime around the fall of 2019, we conscripted our long-standing D&D group into producing a play together. We’re all Theatre artists (in addition to Elven apothecaries, fish-god barbarians, and Tiefling rangers), so it wasn’t too much of a stretch to pivot from eating pizza and rolling dice to eating pizza and rolling dice and also creating a script outline. So far, we’ve worked on projects spanning the worlds of film, live theatre, and audio, all united by a common interest in big stories, big friendships, and very schlocky monsters.

How did this all change with the pandemic?

Well! We went from writing a play to writing a film, so that was certainly one major shift! We had to essentially scrap everything but our characters, but the limits of working through Zoom and screen capture led us to creating and sourcing quite a bit of visual art and original music for Roll With It that we might not have had otherwise.

How did Roll With It come about? Was it something you were planning before March 2020—or was it inspired by the COVID-19 lockdown challenges faced by actors, etc.?

2020 was sent by the chaos goddess Tiamat herself. We all spent so much time on an endless stream of Zoom calls this year, and we were all intimately familiar with trying to seem collected on-screen while everything is unravelling offscreen.

While we never explicitly mention the pandemic in this piece, we often turn to storytelling (and that includes RPGs!) in times of uncertainty. And, you know…sometimes real life becomes so overwhelming that the tiny victory of defeating an eye-themed monster with your friends is all the more important.

What inspired the story behind Roll With It?

Roll With It is a home-brew of our roleplaying experiences, our pandemic anxieties, and the lovely, bewildering vulnerability that can come with sitting around a table with your friends doing funny voices. The first time we played D&D with the eminently gifted and exceedingly gentle Arif Silverman, for example, he murdered every NPC in the vicinity (a family of friendly frog people, in this case). We all threw out ideas of the various ways in which a D&D game could veer wildly off course, and then Charlotte Ahlin drank a lot of coffee and coalesced it into a passable script.

Tell us about the making of Roll WIth It—biggest challenges, greatest joys?

The biggest challenge was probably the global pandemic and how everyone was wildly depressed and couldn’t go outside! The greatest joy was being able to yell about goblins with friends and create a small, chaotic pocket of art in the midst of all this uncertainty.

Do you use the skills you’ve gained in gaming to help write, act, perform? How has it helped your group?

D&D is mostly writing, improv, and math, which all plays directly into theatre and film (except for math, which is a dark witchcraft and should not be tampered with). Being able to think on your feet and come up with a backstory/character voice/scene description that engages your friends and doesn’t actively annoy anyone is definitely a good skill set for anyone in the arts! Most of our friendships were forged on the tabletop battlefield, and it wasn’t difficult to turn a team of adventurers into a team of artistic collaborators.

How have audiences responded to seeing Roll With It?

The overwhelming reaction seems to be somewhere between ,“Wow, this is better than I thought!” and “Aww, I miss playing D&D with my friends,” and you know what? We’ll take it!

Some of our favorite audience comments have been:

“I was sure this would be garbage, for such stuff usually is. But this is great!”

“Loved the archetypes of players (the wizard rules lawyer, the performing bard, the newbie chaotic fighter). Clearly lots of time went into the different visual elements of the screen recording… I’m honestly a little jealous of the DM’s Google doc. The ukulele solo really tugged at my heartstrings, too. Bravo all around. Will share with my gaming group.”

“So I just started playing as I’m dealing with so many life lessons, and loving every piece of this enormous game. This was a delight to see; thanks for making this; I really felt it and cry a little (like a kid actually…).”

“This is utter genius!”

What lessons did you gain making Roll With It that you wish you had known earlier? Or that you would share with anyone making their own film or web series?

Oh god. Editing takes longer than you might think! This was no surprise to Gabrielle Montoute, our incredibly talented and forgiving lead editor who has worked in video production before, but for the rest of us foolish and wide-eyed theatre kids, it was a mild shock.

I’d say start with something shorter than a feature-length film for your first project and ask a lot of real film people for real film advice, or just do what we did and charge ahead with quixotic optimism and a limited understanding of sound syncing. 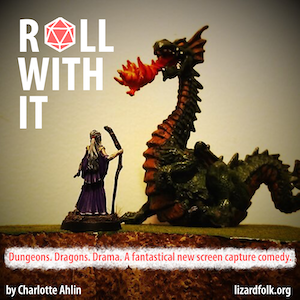 What are you working on now or next?

We are currently in development for Funtasia, a fantasy/comedy audiodrama about an orc, a dragon, and a robot solving a murder mystery at a magical theme park, so stay tuned for that one!

We also have a full-length play that was performed LIVE at the SoHo Playhouse, Plague Doctor, currently streaming on Video on Demand.

How can fans connect with your group and support you?

Previous The Dragon Stone Conspiracy: Author Amanda Cherry Talks about the Strowlers Novel
Next Join in to Talk about Moms in Gaming