Available on The Fantasy Network for streaming, the web series Strowlers by Zombie Orpheus Entertainment creates a world in which magic is real and everyone wants to control it. Everyday heroes struggle to survive their encounters with creatures from beyond the veil, unlicensed magicians, and the shadowy government agencies tasked with controlling it. Now, that world is expanded in a novel called The Dragon Stone Conspiracy by author Amanda Cherry. We talked with Cherry about the novel, her passion for genre fiction, and more.

TFN: Tell us about your interest in the SFF genre. What have been your favorite SFF inspirations over the years?

CHERRY: I have been a fan of genre fiction since before I knew what that meant. Early favorites included journeys to Wonderland, Neverland, Oz, and King Arthur’s Court. I love the idea of what could be possible. My favorite trope/construct, and the reason I enjoy urban fantasy (both historical and contemporary) so much, is the idea that the incredible, unknowable, magical, and fantastic are all around us if only we take the time to look for them.

I love, and am constantly inspired by, the classic storytelling sensibilities of Star Trek, the grittiness of Star Wars, the cleverness of the October Daye books and the ways tech and magic intersect in Shadowrun. I’d say those are probably among my chief influences.

Tell us about your work. What are some projects you’ve worked on?

My first pro sale was to Cobalt City Christmas: Christmas Harder in 2016, to which I was only invited to submit by virtue of a remark I’d made on social media. Since then, I’ve sold additional short and flash fiction and been a finalist in the NYC Midnight short story competition. My debut novel, Rites & Desires, released in 2018. I was one of the writers on the TTRPG Acute Paranoia and have had nonfiction pieces published on such outlets as Eleven-ThirtyEight, Tosche Station, and Star Trek dot com.

You’ve been an actor and a writer. Do you have a preference?

I love both equally and for similar reasons. It’s all storytelling! When you’re an actor, you take on and embody one piece of the story and count on your costars to bring the rest in order to put the full picture in front of the audience. As an author, all the characters are yours to do with as you will, but your job is the same—use the character(s) over which you have dominion to bring the story to the audience.

How does acting inform your writing?

Coming from an acting background has given me the tools to get all the way inside a character’s head. By the time I finish a book, I know the ins and outs and preferences and dislikes of my POV character(s) up, down, and sideways. I think it’s a real advantage when looking to draft a book to be able to climb inside the character and see what moves them.

The tagline on your website is: “Villains are people too!” What do you love about portraying villains as people? Why does that matter?

Everyone is the hero of their own story!

The classic, moustache-twirling, out-to-do-evil villain is just not of interest to me. I am a huge fan of complicated and interesting villains who don’t see their own wickedness. I like getting readers to empathize with a character and then reminding them that this character maybe isn’t such a good person. I love the way that can give a reader pause and make them think about their own possible villainy.

People are complicated, and sometimes looking at a villain through the lens of their humanity can be the most interesting angle by which to experience a story.

How did you become involved with Zombie Orpheus Entertainment and Strowlers?

As a fan! I have been a friend and fan of several of the folx both in front of and behind the camera on Strowlers for a number of years. I was in the audience for a screening of the Seattle and Ireland episodes, and I knew before the final credits rolled that I wanted to tell stories in this universe.

I raced home and banged out the initial treatment for what would eventually become The Dragon Stone Conspiracy within a day. After that, it was a matter of setting up a pitch meeting, getting the green light, and putting words on the page.

What were the goals you had in mind as you wrote your Strowlers novel?

Two major things I wanted to be sure I did successfully were to make Pepper as in-character as possible and to keep the feeling of the magic in the book recognizable as the same magic from TV/film. I was fortunate to have access to both the Strowlers showrunner and the actress who plays Pepper as I drafted the book so that questions of character or of universe didn’t have to wait for edits.

The other big goal was to make The Dragon Stone Conspiracy a solid entry point for readers who were as-yet unfamiliar with Strowlers. I wanted to be sure to make the book accessible to readers who hadn’t yet discovered the TV/film side of the franchise and hopefully to get them excited enough about the world of Strowlers to go check it out when they finished reading.

How closely did you work with the crew of the series?

When you write IP, the first step after having the pitch accepted is having the outline approved. The Strowlers showrunner and I worked together to take the treatment I wrote in such a hurry the day after I watched the films on the big screen and turn it into a whole story that would work within the existing framework of the world.

Ben Dobyns (at ZOE) is a gem of a person, and they were always available to me when I had questions or concerns. And the few times we met in person to have chats/get updates, something magical came of it and we were able to add to the existing universe in a way I wouldn’t have dreamed of going in.

I also had unfettered access to Lisa Coronado, who plays Pepper on screen. Being able to pick her brain and get her read on things was super helpful for making sure the character was 100% the same person on the page as she is on film.

Not all authors working in IP get this kind of access—in fact, most of us don’t. I was extremely lucky to have those resources available, and I used them a lot. 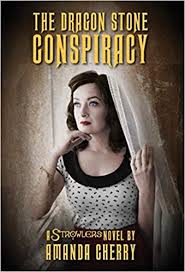 How did you balance the desire to write the story you had in mind with fan expectations?

I was very lucky on this front, having come to the franchise as a fan first. I knew what I loved most about the world and the characters, and I made sure to keep those things in mind as I made my way through the story. I figured that, as much as there is no “typical” fan of a franchise as unique and diverse as Strowlers, what spoke to me was likely to speak to other fans.

So I followed the lodestar of my own passion and fandom and listened to the guidance of the creators and I think we got a great book out of it in the end.

What can readers of The Dragon Stone Conspiracy expect? What do you think they’ll enjoy most about it?

Ooh! I think the thing that’s most exciting is that readers can expect to find the same themes of magic versus empires and the fantastical hiding in plain sight that they will find in any of the Strowlers projects. So fans of the onscreen stories should find the book fits right into the world they love.

One of the fun things about books is that there’s no VFX budget—so there are things that I can do in a book that are impossible (or impossibly expensive) to do on film. So I think a place where the book will really satisfy is in the use of locations and other visual elements that help to tell the story.

As to what I think the fans will enjoy most… It’s probably the part where a Nazi gets punched. It’s hard to top Nazi-punching when it comes to satisfying story moments.

Are there any plans to write a sequel? Or other novels within the Strowlers world?

There have been conversations about the possibility of a short film that follows the stone into another place and time; that’s a story I would be part of creating. I’m also aware that some of the characters introduced in the book are weaving their way through the history of the Strowlers universe and that I may see them sooner than I think.

And author Erik Scott DeBie, a friend and colleague who I absolutely adore, is working on the next Strowlers novel. I can’t wait to do book events together!

What are you working on now/next?

I have a project in the works I can’t talk about yet (isn’t that always the way?) that’s super exciting. I’m also about 2/3 of the way through drafting my next book: a dieselpunk political intrigue story about an unhappy secret princess who learns an ugly secret that stands to destroy her family and her country. In the meantime, I have a story slated to be included in the Cobalt City: Dragonstorm anthology scheduled for third quarter 2021 and I’m always game for more online nonfiction and geek culture work.

What final message would you like to leave readers with?

I’d just like to encourage people reading this who feel like they have a story to tell to go out and do it. Stories have power. Everyone’s stories matter. Don’t self-reject.

Where can people grab a copy of The Dragon Stone Conspiracy?

I’m a fan of Bookshop.org. You can buy my books (and lots of others) through this online clearinghouse while supporting your local small book store. Find my book here: The Dragon Stone Conspiracy: A Strowlers Novel.

Michele has been writing and editing professionally since 1997. In 2017, she launched full-time into her own copywriting and editing business, serving marketing firms, service businesses, nonprofits, book publishers and consulting firms, as well as indie authors. She serves as Editor of the science fiction website Recursor.tv and The Fantasy Network News. Michele is also co-founder of Writing Well Creative Writing Workshop and a partner in Three Point Author Services.
@chippermuse
Previous Tune in for Mental Health in Gaming
Next Lizardfolk: An interview with the creators of TFN’s Roll With It