There’s nothing quite like seeing a superhero character that mirrors your experience of the world. For filmmaker and storyteller Kayden Phoenix, that had led to the work she’s doing on LOQUITA, a supernatural Latina superhero graphic novel, which is finishing up its Kickstarter soon.

Inspired by the kind of tale and characters Phoenix would love to see onscreen, LOQUITA tells the story of a high school sophomore from Miami, Florida, who starts to see demons and is scared beyond belief. It doesn’t help that no one else can see them. A ghost, Sissel, asks Loquita to help save her, and although Loquita has no idea how, she accepts. Loquita follows the clues leading her deeper into the supernatural, all while maintaining her grades and family life.

Phoenix shared with TFN some of the inspiration and goals behind her new graphic novel.

TFN: What’s your background in terms of art, writing and the creative industry? 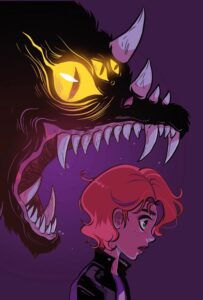 PHOENIX: I come from a writing background—mainly scripts in the film industry. I translated a feature script into a graphic novel. I have no artistic ability (ha), but my artists do and I’m very fortunate to have them.

How long have you been writing?

What writers have you been most inspired by, or that you feel have most influenced your style?

Writers that influence me depends on my age, lol. They definitely have changed over each chapter.

For comics, definitely Alan Moore (Watchmen, V for Vendetta, Killing Joke) for his power to revolutionize a mindset.

Is this your first graphic novel, or is it part of a series?

This is my third graphic novel in the Latina Superhero series, A La Brava. Each superhero has their own origin story. This is Loquita’s.

What has the process of creating this graphic novel been like? How did you approach the collaboration with your team?

Working with a team is my favorite part! I love collaborations because everyone brings something different to the table yet has the same overall goal. On the first book, Jalisco, an artist, suggested we work off Google Drive and we each have our own folders. So when one page is done, penciller will put into inker’s folder, inker to letterist, etc. It’s a good system to have.

What do you hope readers will take away from reading your work?

I hope they’re inspired to create and inspired to fight for change. I’m big on fighting for marginalized people and issues that we don’t see in mainstream media.  So to be able to create a spark is progress.

What plans do you have next, after the graphic novel is published?

I plan on have the next books out this year and next. There are six books total—five origin stories and then the team “origin” story. On my way!

What advice would you offer to indie creators who want to produce a graphic novel and get it out into the world?

Find your why. There’s a saying, “your pain is your brand”. Meaning if domestic violence (or any social issue) pains you, I’m sure you’ll do everything you can to get the message out. That’s passion, which will move you forward. Lastly, social media is free marketing— use it.

How can fans connect with you and support you, beyond the Kickstarter?

Thank you for this opportunity. The Latina team (Eva Cabrera – Illustrator, Adriana DLT – Colorist, Sandra Romero – Letterist) and I appreciate your support.

Michele has been writing and editing professionally since 1997. In 2017, she launched full-time into her own copywriting and editing business, serving marketing firms, service businesses, nonprofits, book publishers and consulting firms, as well as indie authors. She serves as Editor of the science fiction website Recursor.tv and The Fantasy Network News. Michele is also co-founder of Writing Well Creative Writing Workshop and a partner in Three Point Author Services.
@chippermuse
Previous Calling All Creators: Submit to Stareable Fest 2021
Next Cognition Starring Andrew Scott and Jeremy Irvine now on VOD