Saving Throw to Benefit The Trevor Project with Charity Marathon

Can Twitch streaming do good in the world? The crew at Saving Throw says yes.

One of the live streaming shows on The Fantasy Network’s new Twitch page, Saving Throw is dedicated to helping people discover, learn and enjoy RPGs in an inclusive and entertaining way. And they’re hosting a charity fundraising marathon to benefit The Trevor Project this Sunday, February 7, from 10 AM – 11 PM Pacific Time.

The connection between Saving Throw and The Trevor Project is a natural one, says the show’s co-founder and executive producer, Dom Zook. “Saving Throw was created as an inclusive space, and we have an ongoing goal to increase awareness on behalf of the LGBTQ community,” he says.

The marathon’s goal this year is to raise over $7,000 for The Trevor Project, and the lineup of events and prizes is impressive. First up will be the series premiere of Salt Bay: Court of Thorns, featuring special guest Brennan Lee Mulligan — writer, performer and gamemaster of Dimension 20. 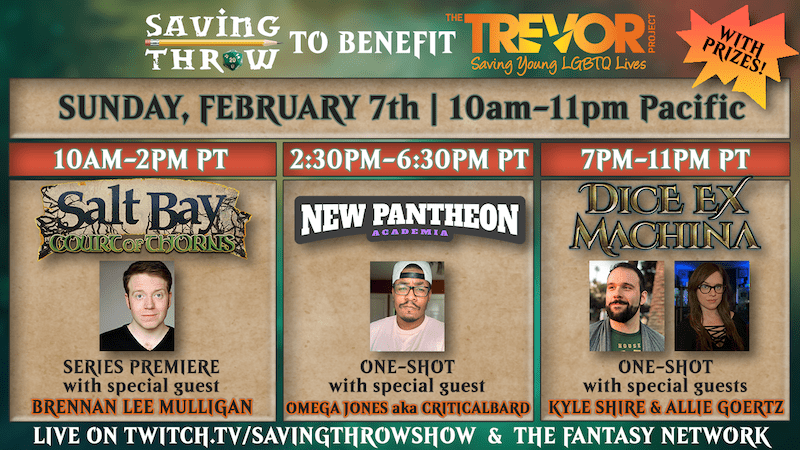 What can you expect if you tune in during the maraton? Zook says to be prepared for anything.

“Our show is an unscripted, fully improvised, tabletop gaming experience,” he says. “All the shows are brimming with fun for people to enjoy.” Some of the marathon’s events will introduce new characters, while retaining each show’s unique flavor. The elements that have most attracted fans will be there in spades, guaranteeing to delight viewers along with supporting teens in crisis.

In addition to gaming fun, Saving Throw will be giving away tons of cool prizes all throughout the marathon. Tune in for chances to win RPG games, gift cards, pins, tee shirts, and other fun items from Noble Knight Games, Die Hard Dice, Norse Foundry, Hero Forge, and others. Other top giveaways include subscriptions to The Fantasy Network, a Fartherall World Bible, a TeePublic prize pack, Savage Worlds Core Rulebook, and more.

The Saving Throw marathon will be streaming live on Twitch.TV/SavingThrowShow and The Fantasy Network.

To stay tuned with more from Saving Throw, check out their website, and view their shows live on Monday and Wednesday evenings.

Michele has been writing and editing professionally since 1997. In 2017, she launched full-time into her own copywriting and editing business, serving marketing firms, service businesses, nonprofits, book publishers and consulting firms, as well as indie authors. She serves as Editor of the science fiction website Recursor.tv and The Fantasy Network News. Michele is also co-founder of Writing Well Creative Writing Workshop and a partner in Three Point Author Services.
@chippermuse
Previous Reimagining a Traditional Biblical Story: Jonah’s Voyage to Atlantis
Next Support Myrlan: Kickstarter’s #1 Fantasy Film Project