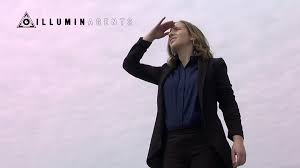 Do conspiracy theories ever go out of story writing fashion? Probably not, but these days it’s like they’re more relevant than ever for SFF creators.

In this week’s Content Creator Interview, we’re chatting again with writer/director Herman Wang, this time about his new sci-fi web series ILLUMINAGENTS, streaming for free on The Fantasy Network.

In ILLUMINAGENTS, Wang wanted to explore the concepts of conspiracy theories and the effect they have on people and society. But instead of portraying these concepts in a traditional serious drama, he has chosen to present the content in a dramedy/dark comedy fashion, believing that its influence on the viewers could be given a unique twist. As Wang explains below, he believes sci-fi is best when it is causing the viewers to ask questions, and big questions at that.

Check out what he had to say about ILLUMINAGENTS.

What inspired you to create the story behind ILLUMINAGENTS?

To me, the thematic aspect of science fiction has always been most important. It should be entertaining, of course, but sci-fi at its best isn’t afraid to ask important questions, even if it doesn’t have simple answers to provide. The HBO series WATCHMEN is a good example.

ILLUMINAGENTS was created to deconstruct the prevalence of conspiracy theories in society, especially now that they’re having such a negative effect. Taking them and wrapping them inside a darkly comedic web series seemed a good way to get people thinking about why humans believe the things they do. 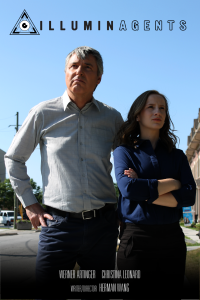 How much money did you raise to create ILLUMINAGENTS?

The pilot was funded by our production company and cost around $4,000 (CAD) to make. We wanted to have something tangible to show potential investors and for viewers when we start a crowdfunding campaign.

The plan is to shoot five more episodes for a complete first season. Our crowdfunding goal planned for fall 2020 has been scaled back from its original amount, because we realize with COVID-19 that people are going to have less available in their entertainment budget.

What has been the most rewarding part about making this particular series so far?

It’s been fun getting back into the swing of things after we wrapped our previous web series project, THE SPELL TUTOR. A lot of the talent has been brought back on board, both behind the camera and in front of it. People are going to notice a lot of familiar faces in ILLUMINAGENTS.

How can fans get involved in ILLUMINAGENTS?

For this series, we tried something new by creating supplemental one-minute videos that aren’t really episodes, but go alongside the season. It’s an experiment to see if super-short, easily-digestible content will catch on with viewers, even if they haven’t watched the pilot episode or the series yet.

Another thing we think will be enjoyable for fans is that we’re putting together a musical episode for the season finale. We’ve seen that musicals have been hugely popular in the community, and we think our take on it will be unique and fun for everyone.

Be sure to check out ILLUMINAGENTS, streaming for free on The Fantasy Network.

Justin Moe is the lead host of The Fantasy News Video Segments as part of TFN. He is a director, producer, and actor in the MD/DC/VA area, having worked in both film production and theatre for 14 years. A story-teller at heart, he has produced and directed several independent projects, as well as helped support others with his cinematography and video editing skills to get them over the goal line.
Previous Magic and Secrets: Herman Wang, Creator of The Spell Tutor
Next Sand in Your Reboot? It Must Be Villeneuve’s DUNE