It is with a heavy heart that we announce the death of legendary Star Trek actor Leonard Nimoy. Nimoy had been hospitalized earlier this week for chronic obstructive pulmonary disease, a disease he had been battling for at least over a year.

Nimoy was a father, a husband, a musician, a poet, a writer, an artist, and best known for his role of Spock in the Star Trek franchise since the series debuted in 1966. Star Trek alumni William Shatner,  Wil Wheaton, Zachary Quinto, and Simon Pegg have all expressed their grief on his passing:

“I loved him like a brother. We will all miss his humour, his talent, and his capacity to love.”- William Shatner

“We stood on your shoulders, and wouldn’t have had a galaxy to explore if you hadn’t been there, first. Thank you, Leonard, Rest in peace.” Wil Wheaton

“My heart is broken,” writes Zachary Quinto, who also played Spock in J.J. Abrams 2009 and 2013 films, “I love you profoundly my dear friend. And I will miss you everyday. May flights of angels see thee to thy rest.” On playing Spock, Nimoy once wrote, “In Spock, I finally found the best of both worlds: to be widely accepted in public approval and yet be able to continue to play the insulated alien through the Vulcan character” (source).

This complexity of Spock—this duality of being both human and alien, insider and outsider—is one of the things that make Star Trek so special. As a Vulcan, Spock taught us the power of thinking cooly and logically. As the only alien on the bridge of the Enterprise, he taught us to embrace what makes us different. But Spock was also human. And as a human, he taught us the silent, unshakable  strength of friendship and love. That the mystery of love, fear, hope, sadness, and all that makes us human is a unique and special thing in this vast universe. As the Star Trek franchise continues and as new generations come to The Original Series for the first time, Leonard Nimoy’s incomparable, iconic Spock will undoubtedly continue to teach us what it means to be human.

So it is with a heavy heart— an ordinary, beautiful, marvelous human heart— that we we raise a glass and say to you one final time, Mr. Nimoy, “live long and prosper.” 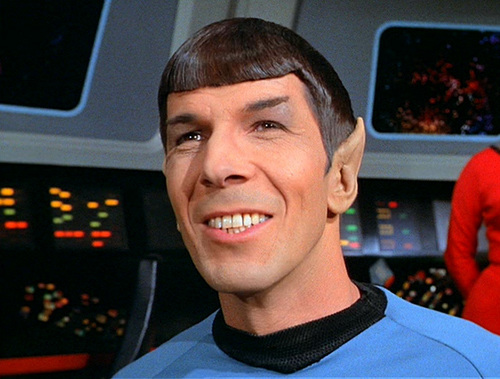 Michele has been writing and editing professionally since 1997. In 2017, she launched full-time into her own copywriting and editing business, serving marketing firms, service businesses, nonprofits, book publishers and consulting firms, as well as indie authors. She serves as Editor of the science fiction website Recursor.tv and The Fantasy Network News. Michele is also co-founder of Writing Well Creative Writing Workshop and a partner in Three Point Author Services.
@chippermuse
Previous Wars on Kinkade by Jeff Bennett
Next Star Wars Rebels Season Finale to Feature Darth Vader