Here’s a list of the newest Science-Fiction and Fantasy titles now available! Terry Pratchett fans have yet another reason to rejoice–in addition to Raising Steam released in March, this month sees the release of the new Discworld Companion, Turtle Recall. We also have debut novel Unwrapped Sky, by Rjurik Davidson who is described below as “a young master of the New Weird.” Check these out and be sure to pick up your favorites at your local bookstore! In the first Crown of Slaves installment in more than four years, master agents Victor Cachat and Anton Zilwicki return to Mesa, where the situation is even worse than they had imagined. Not only are their attempts to uncover and neutralize a threat greatly complicated by merciless Alignment pursuers; they also risk getting caught in the crossfire of the revolution beginning to erupt against the planet’s rulers. An exciting standalone Honorverse sequel to Torch of Freedom

The promised sequel to Bowl of Heaven (2012), in which a starship containing would-be colonists encounters a vast bowl-shaped construct that’s being steered toward the same destination, using an entire star as its engine. Once the humans begin to explore the artifact, they learn that it’s been wandering the galaxy for millions of years, capturing and enslaving other intelligent species and incorporating them into its complex ecology. ….The upshot is often impressive—not too surprisingly, given the authors’ stellar credentials—yet only occasionally engaging. With the welcome influx of new ideas, a definite improvement on Volume 1

Steles of the Sky

Bear’s stellar conclusion to her Mongolian-flavored fantasy trilogy (after Range of Ghosts and Shattered Pillars) is a satisfying mix of traditional epic fantasy elements, flavored with original magic and grounded with mundane details that make the fantastic seem entirely possible… Bear’s trilogy makes a rich contribution to epic fantasy’s expanding borders of emotion and invention.

In the near future, photographer Timor Tarent is returning to Britain from eastern Turkey, grieving the recent loss of his wife, Melanie, in a roadside terrorist attack. But before readers can find out too much about Timor, the story jumps to World War I and a stage magician named Tommy Trent, and then moves to a World War II-era airfield and another avatar of Timor, interweaving back and forth among what appear to be echoes in time and space. VERDICT Priest (The Prestige; The Islanders) explores love and loss in all of these asymmetrical narratives, put together like a slightly disjointed puzzle. The unexplained echoes of characters throughout various time periods along with the lack of a detailed explanation of the mysterious weapons technology known as adjacency might leave some readers unsettled, but those receptive to a more open-ended storytelling style will find this novel utterly absorbing.

For every Pratchett fan, the must-have fully updated guidebook to Discworld!

Turtle Recall is the ultimate authority on probably the most heavily populated—certainly the most hilarious—setting in fantasy literature and includes a guide to Discworld locales from Ankh-Morpork to Zemphis, as well as information to help you distinguish Achmed the Mad from Jack Zweiblumen and the Agatean Empire from the Zoons. Plus much, much more.

Covering everything from The Colour of Magic, the first Discworld novel, through Snuff!, Turtle Recall: The Discworld Companion . . . So Far is the most up-to-the-minute encyclopedia of Terry Pratchett’s extraordinary universe available. 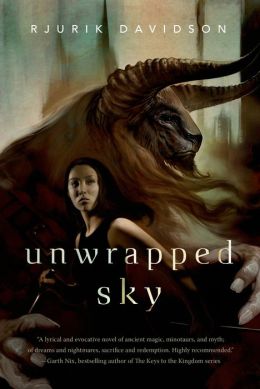 A hundred years ago, the Minotaurs saved Caeli-Amur from conquest. Now, three very different people may hold the keys to the city’s survival….In a novel of startling originality and riveting suspense, these three people, reflecting all the hopes and dreams of the ancient city, risk everything for a future that they can create only by throwing off the shackles of tradition and superstition, as their destinies collide at ground zero of a conflagration that will transform the world . . . or destroy it.

Unwrapped Sky is a stunningly original debut by Rjurik Davidson, a young master of the New Weird.