Music for the 21st Century

adpoole October 25, 2012 General Comments Off on Music for the 21st Century Some of my favorite composers are Handel, Mozart, Beethoven, Bach, Tchaikovsky, Dvorak, Debussy, Respighi and Ralph Vaughan Williams. Some of these composers in this list are recognized geniuses. Add to this list, one more.

There are some modern composers that I enjoy. Some of it can be wonderful but usually post-tonal style and the dissonant, discordant sound is a turn off for me. Some months ago I was listening to my local classical station in the middle of the night, and I heard a piece that was so moving that I had to get up, go online and try to figure out who wrote it. The piece was Fratres for string orchestra and percussion. And the composer: Arvo Pärt.

Arvo Pärt, born in 1935 in Paide, Estonia studied music in childhood, going to the Tallinn Music Secondary School and later, the Tallinn Music Conservatory. While there he studied and worked as a recording engineer and composed music for film and for the stage. By the time he graduated he was already a professional composer with awards to his credit. In the 1960’s he went on to create works using the techniques of serialism (Symphony No.1, Symphony No.2) and later, collage techniques (Collage Uber BACH) and western European polyphony by creating works such as Symphony No.3 but what many listeners remember of his work is a very unique style he came to after this period. The Soviet Union occupation of his homeland would have a tremendous effect on his music. Pärt tended to provoke extreme emotions and opinions with his iconoclastic and unique musical style. Pärt went into self-imposed silence for years before he started making music again and when he did finally decided to make music it was nearly, wholly original and radically different from the usual sound of 20th century serious music.

This style is what the composer himself calls “tintinnabuli” from Latin, meaning “little bells.” In his own words: “I have discovered that it is enough when a single note is beautifully played. This one note, or a silent beat, or a moment of silence, comforts me. I work with very few elements – with one voice, two voices. I build with primitive materials – with the triad, with one specific triad, with one specific tonality. The three notes of a triad are like bells and that is why I call it tintinnabulation.”  It also garnered him the label L’enfant terrible of the Soviet occupied Estonian music world. 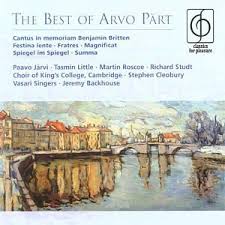 I could not explain his music any better than he already has and there is something to be said for limiting yourself and the materials you use in order to further express yourself creatively as an artist. This musical sound is some of the most beautiful modern serious music that I have heard in many years. It is anything but atonal. There is a place for the atonal and it can be wonderful but so much modern serious music has this sound that it becomes difficult, even a chore to listen to, in my opinion. His music breaks with that modernist tradition in that it is highly melodic and deeply emotional sounding, even devotional. I would dare say that if you enjoy choral music, religious hymns of centuries past, especially those of the 14th and 15th centuries, you would enjoy Arvo Pärt’s work. That night, it was like a tidal wave of beautiful and minimalist sound washing over me. But not minimalist as hard and atonal. It is tonal, brooding, haunting with single notes that hang in the air with such purity of sound as to make you listen, even evoke strong emotion like sadness, joy or even religious fervor. It is a style that brings a note to resonate in its entirety, it’s fullest sense. He is the opposite to Mozart I suppose in that sense yet his music is able to evoke the same strong emotions in a person as that former musical genius.

Of course, living under a communist regime, originality in any form is unwelcome. Because much of Pärt’s music diverged away from what the Soviet Union found acceptable he was eventually forced to move away with his family and they finally settled in Berlin, Germany. Pärt now focuses on setting music to religious texts and much of his work surrounding these has gained popularity worldwide. He has had quite a few musicians who have championed his music and I am very happy they have recognized his genius and brought it to classical music lovers in the West. My own favorite pieces are Seven Magnificat Antiphons for choir, Tabula rasa, The Beatitudes and of course the  variations on the Fratres theme, Fratres for string orchestra and percussion being my favorite one. Arvo Pärt’s musical voice is unique. It is hard to guess who his music resembles. You must listen and decide for yourself.

You can sample his music on YouTube and I believe his music can be found on the EMI label. It will certainly add great beauty. There is also a documentary on Arvo part’s life and work. Called 24 preludes for a Fugue. A ninety minute piece that escorts you through vignettes of his life as he works. To learn more about Arvo Pärt you can go to the website, arvopart.info. You can listen to music samples there as well and find information on all his work. There is a great interview, back in 1997, of Arvo Pärt by Björk on YouTube. It is short but revealing about his mind on how and why he creates his music the way he does.