Make It Personal: Interview with Wyatt Moore (The Inventor)

At the end of the day, your film/story should express some part of you. Your artistic flare should shine through. This hugely important part of creating a film has been the practice of filmmaker Wyatt Moore, creator of The Inventor, a web series about a mad scientist whose crazy creations cause his roommates a host of problems, like memory manipulation, potential manslaughter, dangerous ray guns, and yes, even stolen coffee. 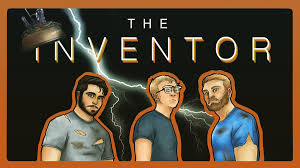 While many filmmakers may focus on creating something “mainstream” in order to make money (which of course can be successful), filmmakers must also ask themselves, Am I satisfied with that approach? Or will it drive me nuts to try to fit someone else’s mold? There’s no wrong answer to these questions. For Wyatt, the answer was taking his own road, discovering the importance and satisfaction of creating a film that is personal to him, that displays something he would want to watch on tv or in a theatre. And he has seen success with this approach.

Through Wyatt’s journey, he has learned not only should you follow your heart or “gut” in what you are creating, but you should also focus on the heart of a story, which is character. Without well-written characters that audiences care about, the incredible effects and visuals most likely will not be enough to carry the film. Wyatt recognized this and applied it to his creations. Every project, he says, is a step forward with valuable things to learn along the way. Let’s hear a little more about his journey in creating his web series, The Inventor.

I took a film course in high school out of curiosity, and the rest is history. I was hooked from the start. So hooked, in fact, that when I later moved to a school that didn’t have a film program, I banded together with some friends and formed a film club. That’s also where I met Tyler (Stoudt, producer/actor). What sparked this idea/world? Your inspiration?

This may sound cynical, but it’s the truth. Post-film school, I was sick of making what other people wanted to make. Sick of worrying about what my professor would think, or if the project would be festival-worthy. I wanted to make something I would watch, plain and simple. Being a big fan of sci-fi and animation, I just thought of the exact kind of show I’d like to see, and shot for that.

I think the total money spent on the show was around $1,000, at most, for all six episodes combined. Tyler wanted to start a YouTube channel that had space for all things creative: gaming shows, podcasts, cooking, narrative and more. The Inventor was just meant to be a small part of that, and was funded using a portion of the channel’s Patreon income.

What do you wish you had done differently in your last episode?

More prep time. I think by episodes 5 and 5 Part II, we had a rhythm going, which isn’t bad, but I put less time into prepping each episode. Complacency is the killer of creation, after all. I wish I had slowed down, considered shot variety, lighting and just about everything, more.

What mistake in your film do you see, but no one else does?

Loads. The most distracting one for me (which no one has pointed out so far) is in episode 1 of The Inventor. Miller, Mikel and Gardner are in Miller’s garage tinkering with a teleporting device and trying to fix it, because Brian is stuck inside. It was already established in the previous scene that it’s night time; however, there’s visible daylight peeping in through the cracks of the garage door. It’s maddening for me to watch.

What was the most rewarding part about making this particular series?

Watching the first rough cut was incredibly satisfying. Even though none of the SFX were rendered, I could see that it was coming together well. Truth be told, I’d only written the script as a fun writing exercise. I never had plans to even make it; I was writing as if I had an unlimited budget. It wasn’t until Tyler read it and said, “This is super filmable,” that I started to even consider filming it. So seeing the rough cut was very satisfying. Some people say this is bad advice, but it’s always worked for me. In fact it’s only when I follow it that I seem to do well. Don’t consider, “Who will watch this?” or “Can I sell this?” or any of those hypothetical scenarios. Make something that you’d want to watch, like, really want to watch. No matter how big or weird or hard to make. Make it personal. Because if you’d like to watch it, normally there’s a whole base of like-minded people who feel the same way. You just don’t know it yet. Worry about how to sell it later.

Put characters first. Give them blue skin, a bunch of gadgets and make them the native of a lava planet. But do all that after you figure out the character. What are they thinking? What are they feeling? What’re their goals? If you can’t answer those questions, then no one will care how sweet your SFX looks. Some of the best looking sci-fi gets weighed down by boring characters.

What are your pet peeves in film making?

Style over substance. Give me a well written character over a $100 million advertisement any day. I don’t care how much money you have; if you’re making me watch your movie, for the love of God, don’t be boring.

The DIY indie filmmakers of the ’90s. Robert Rodriguez, Sam Raimi, Kevin Smith. They showed a generation of young people that if you work hard enough, anyone has the opportunity to do this. Honestly, I’m still trying to figure out the answer to that myself. Aside from the obvious (making good stuff), I’ve found that frequent output is key. If you start slowing down, people will migrate elsewhere. Keep them engaged!

How are you set up so fans can get involved in future productions and help grow your community as it relates to your content?

As we speak, we are only weeks away from launching a Season 2 Patreon and Enrich service. Fans will get access to a podcast where we talk about production, updates, old set stories, indie film success and more. Every dollar goes to funding Season 2, which we hope to shoot soon. Also, you get free stickers!

I think that depends on what your project is. They definitely help reach a vast fan base as quickly as possible. But personally, these days I think we worry too much about that, and not enough about what each actor actually brings to their parts.

I’m pretty calm around celebrities, but if I ever met Chris Nolan or Edgar Wright, I don’t think I’d be able to keep it together.

Justin Moe is the lead host of The Fantasy News Video Segments as part of TFN. He is a director, producer, and actor in the MD/DC/VA area, having worked in both film production and theatre for 14 years. A story-teller at heart, he has produced and directed several independent projects, as well as helped support others with his cinematography and video editing skills to get them over the goal line.
Previous Watch Magnetically Controlled Microrobots Do Flips in Live Colon
Next Telling Stories Well: Galactic Galaxy Filmmaker Anthony Ferraro