Every four years, Americans are confronted with a basic question during presidential elections: change or more of the same? In the 2016 presidential campaign, the winning mantra definitely seems to be “change” of some sort, whether on the extreme left or the extreme right. In Star Wars fandom, audiences voted with their wallets for “more of the same” in The Force Awakens. At least that’s the most prominent criticism of the film that otherwise earned over $1.9 billion at the box office and has a 93% positive rating at Rotten Tomatoes. The basic plot points of the film mirror the original Star Wars and, to a lesser degree, The Empire Strikes Back and Return of the Jedi).

The New York Times’ Ross Douthat summarizes the problem by noting all the similarities between A New Hope and The Force Awakens:

Walk with me here: You’ve got an orphaned Force adept unaware of her powers living on a desert planet near an old man played by a famous British actor who probably holds secrets to her past; she then meets up with a droid carrying secret plans that its Rebel Alliance — sorry, Resistance — owner hid inside it just before she — sorry, he — was captured and tortured by the Empire — sorry, the First Order. You’ve got teams of stormtroopers scouring said planet in search of those plans, killing innocents along the way. You’ve got a Grand Moff Tarkin figure who wants to rely on a planet-destroying superweapon instead of the Force and who’s in a rivalry with a masked Darth Vader figure for the trust of a strange deformed Emperor — sorry, Supreme Leader. You’ve got the stop at a Mos Eisley cantina-style watering hole filled with smugglers and crooks. You’ve got the destruction of a planet(s) crucial to the Resistance effort midway through the movie, and then you’ve got the threatened destruction of a rebel base on a verdant planet by the same superweapon, which can only be averted by an X-Wing attack on a single weak point. You’ve got a confrontation between the Darth Vader figure and an older, wiser force for good who knew him intimately before he fell, which ends with the older wiser figure being killed by the Vader figure while our young hero — sorry, heroine — looks on in horror. And then you’ve got the X-Wing attack itself, which succeeds in blowing up the entire enemy super-base literally seconds before the superweapon is scheduled to fire on the base where Princess — sorry, General — Leia and a group of Resistance leaders are watching the attack unfold.

And all this is before the final attack on Starkiller Base (“Death Star 3.0”), which like the first Death Star was destroyed when an X-Wing flies down a trench and destroys a weak spot. Douthat ultimately concludes that the plot was a “thrilling, flawless fifteen minutes of cinema almost forty years ago.”

The parallels between The Force Awakens and A New Hope are obvious, but what do they tell us about the originality of the latest Star Wars movie? Originality in storytelling is tricky because it’s highly subjective (unless dealing with claims of copyright infringement or plagiarism, which require more objective evidence). A story might feel original even if it is in fact highly derivative. Telling the same story in a different genre, historical setting, or language can do much to make the old seem new. West Side Story is almost exactly the same as Romeo and Juliet, but setting it in New York City and throwing in some musical numbers made it appeal even to people who might never read Shakespeare. For decades, Disney has plundered classic fairy tales and turned them into animated feature films, which often come across as quite different from the (usually darker) originals.

Star Wars itself drew upon many sources, from classical mythology to the Flash Gordon serials. In interviews, Charles Lippincott has called the original Star Wars a remake of Akira Kurosawa’s The Hidden Fortress. Isaac Asimov, Frank Herbert, and other science fiction authors thought Lucas ripped off their material. Yet, the film did not face criticism for its lack of originality because its setting, pacing, special effects, and sense of adventure set it far apart from any of its sources. On paper, the basic plot of A New Hope might resemble The Hidden Fortress, but Kurosawa’s film didn’t look anything like George Lucas’. In fact, amidst a sea of movies during the 1970s rooted in realism and cynicism, an optimistic space opera was unlike anything audiences had ever seen.

Forty years later, The Force Awakens finds itself in a different situation. It’s not accused of copying classic stories, but rather a story within the same franchise. In other words, it exists in a world where Star Wars already exists. 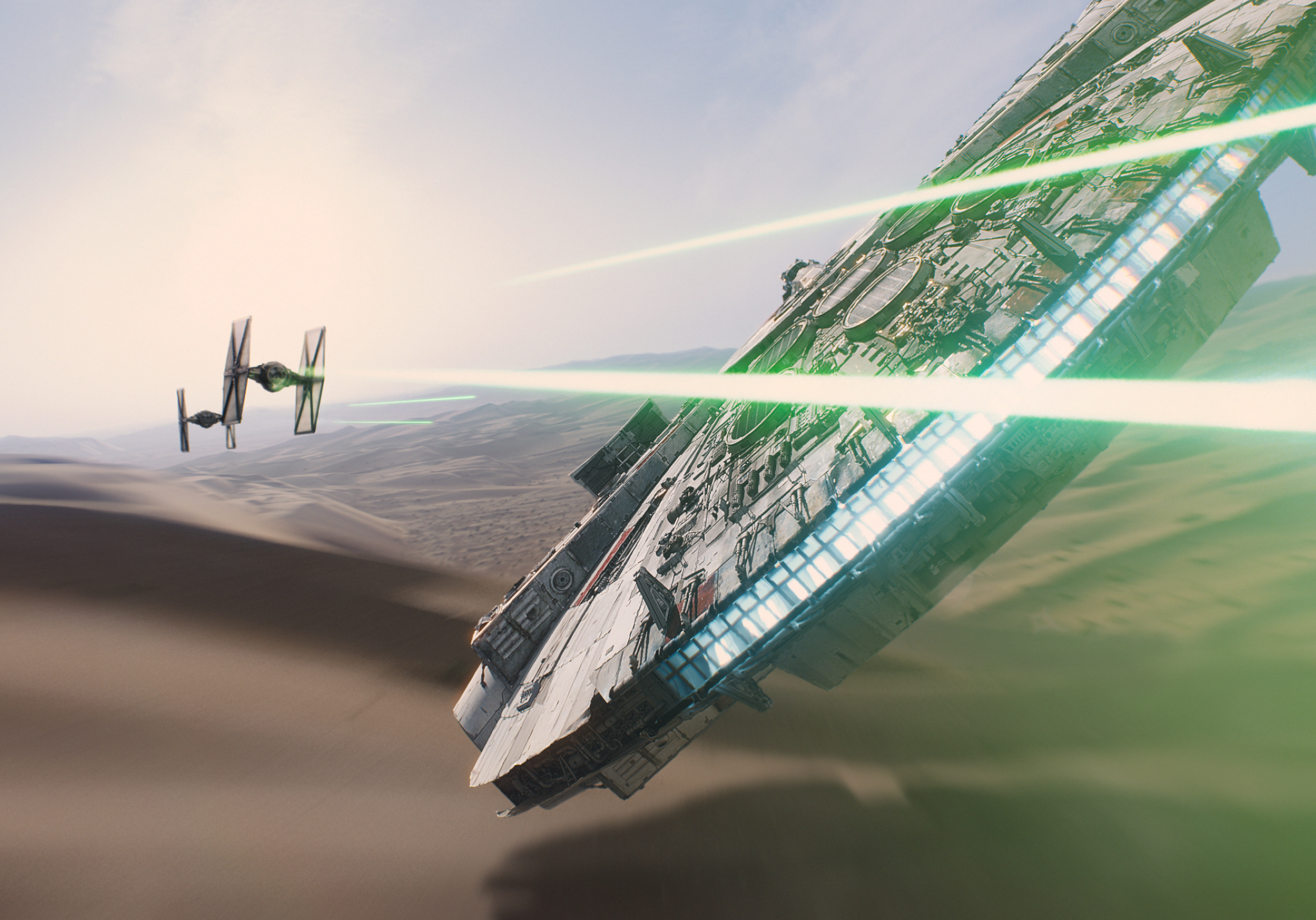 I think there’s enough to distinguish The Force Awakens from its predecessors, despite some overarching similarities. Rey, Finn, and Poe Dameron are not copies of Luke, Han, and Leia. Rey and Luke both grew up on desert worlds, but where Luke yearns to leave Tatooine, Rey wants to wait on Jakku for her family. Finn is the first major character in a Star Wars film to start off as an ordinary solider – and a Stormtrooper no less! Poe is a hotshot pilot like Han, but has none of Han’s cynicism (his idealism is if anything more like Leia’s). The film also complicates the our relationship with the villain right from the start. Knowing that Kylo Ren is Han and Leia’s son, we don’t just want to see him defeated; we want him redeemed.

I suspect a big part of The Force Awakens’ “originality problem” actually lies in its production design. As I noted in my review of The Phantom Menace, the new movie is heavily rooted in Ralph McQuarrie and Joe Johnston’s designs for Original Trilogy. From slightly modified versions of X-Wings, TIE Fighters, Stormtrooper armor, and even the Millennium Falcon, the First Order and the Resistance look just like the Empire and Rebels. Aside from BB-8, the adorable volleyball droid, the film looks like A New Hope, albeit with a much larger budget. These visual similarities can’t help but draw attention to similarities in the plot. Interestingly, The Art of The Force Awakens, a book filled with concept art for the film, contains some intriguing new designs of planets and starships, but ultimately these were discarded. Why?

It seems clear that Disney and Lucasfilm decided to stick close to the Original Trilogy as part of a deliberate strategy to excite old Star Wars fans and attract new ones. In an interview, director J.J. Abrams acknowledges the similarities, but notes, “What was important for me was introducing brand new characters using relationships that were embracing the history that we know to tell a story that is new — to go backwards to go forwards.” In other words, The Force Awakens partly serves to continue the story, but also attempts to encapsulate the broader Star Wars experience. Based on audience reactions, and the way this new film has excited even more people about Star Wars, I think it largely succeeded. I still wish in retrospect that the film had taken a few more risks, especially with the production design and the Starkiller Base battle sequence, but it’s not just a carbon copy.

This post comes from a valued Legendarium Media contributor. If you want to contribute content, we would love to hear from you.
Previous Retrospective Review: Return of the Jedi
Next Legendarium TV Recap: “Arrow” and “Supernatural”